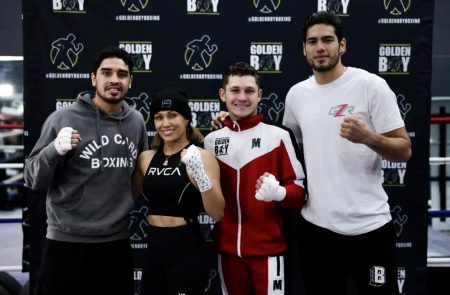 Light heavyweight Mexican superstar Gilberto “Zurdo” Ramirez (42-0, 28 KOs) hosted a media workout today ahead of his WBA Light Heavyweight eliminator against the dangerous Yunieski “The Monster” Gonzalez (21-3, 17 KOs) on Saturday, December 18. The 12-round event is set to occur at San Antonio’s AT&T Center and will be streamed live exclusively on DAZN worldwide.

Also in attendance was East Los Angeles’ undefeated boxing sensation, Seniesa “Super Bad” Estrada (21-0, 8 KOs, who will be putting her WBA Minimumweight World title on the line against Maria “La Imparable” Santizo (9-0, 5 KOs) in a 10-round DAZN co-main event on December 18. Los Angeles based undefeated boxing prospects Victor Morales (15-0, 8 KOs) of Vancouver, WA and Raul “Cougar” Curiel (10-0, 8 KOs) of Tamaulipas, Mexico, were also in attendance as they are set to participate in the Golden Boy Fight Night on Facebook Watch portion of the December 18’s fight card. Morales participates in a 10-round fight for the vacant WBC International Gold Featherweight title against Los Angeles’ undefeated Rudy Garcia (12-0, 2 KOs). Curiel will face off against Ruslan Madiyev (13-2, 5 KOs) of Indio, CA, in a 10-round fight for the NABF Welterweight Title.

Below are what the fighters had to say about their upcoming events:

“I think my fight against Sullivan Barrera this past July showed my strengths as a fighter. I put on an excellent performance and showed everyone that I am someone to note in the light heavyweight division. Barrera had a lot of experience, he had faced many great champions, and I stopped him. No one had stopped him as I did, and I think that showed that I am ready for significant challenges in the division.

“San Antonio has a big boxing fanbase, and that is big for me and my career as a fighter. I have fought there before, and people love my boxing style, so that they can expect an excellent performance from me on December 18.

“I go into every fight thinking that every opponent is a threat, so I never overlook any opponent. She’s 9-0, so it’s a good match-up, two undefeated fighters. I have been studying her a lot and have learned her strengths, and I see her weakness. I just have been preparing myself to be the best that I can be, fixing any mistakes that I make, and overall just making myself better in every way.

“Now, being a two-division world champion, I think that I have to continue to be even more focused and not get too comfortable. I feel like my mind is stronger going into this fight because I know that I am a multiple world champion, and I want to keep it that way. It’s like what Oscar said to me: ‘winning a world championship is one thing, but keeping it and remaining champion is more difficult.’ And that is something that has stuck with me because he is so right about that.”

“This is my first professional fight for a title, and it means everything to me. It’s a fight that will put me in the rankings, and it puts me a step closer to fighting for a world title.

“My opponent and I have similar records on paper, and it’s a moment for us to show who is the hungrier fighter. This is so important for both of us.

“We have been doing everything to prepare for this fight, from sparring 12-rounds, to intense strength and condition, to mental work; everything. It’s not all physical, it’s mental, and you have to prepare yourself for that; it’s imperative. Thankfully, things have been going well, and I feel strong, the strongest I have ever felt.

“This is my first title defense, and I am ready physically, mentally, and spiritually. It’s going to be a good fight, an entertaining fight, and I can’t wait to put on a good show.

“This is going to be my third fight this year. My last fight was on June 19, Texas, and the fans got to know me there when I initially won the title. I hope this fight will be war; my challenger is very tough, it’s a big test for me. I can’t wait to step into the ring.

“The Texas audience is so special to me because there is a lot of support for the sport of boxing. In addition, my family is out there too. I have a lot of family in San Antonio, and I can’t wait for them to see me in the ring.”

Tickets for Zurdo vs. Gonzalez are on sale now and are priced at $150, $75, $50, $35, and $25, not including applicable service charges. Tickets will be available for purchase at ticketmaster.com or by using the Ticketmaster App on your mobile device.