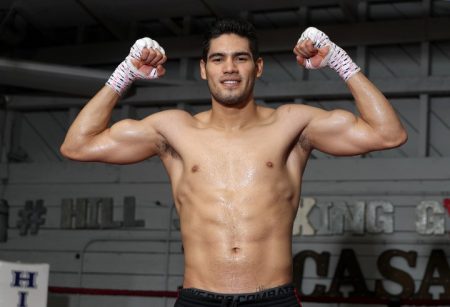 First, Bivol talked about fighting a rematch with Canelo Alvarez, which won’t happen until next May at the earliest. Now, he reportedly wants to fight a unification versus Artur Beterbiev (IBF, WBC & WBO), who has   a WBO mandatory defense due versus Anthony Yarde. And promoter Eddie Hearn, who controls which fights are streamed by DAZN, is pushing Joshua Buatsi as Bivol’s next opponent, if a unification with Beterbiev isn’t made.

Bivol’s mandatory challenger, though, is Zurdo!

“I appreciate the WBA and believe the right process will be followed,” Ramirez said. “I’m confused about Bivol ducking me. I earned the WBA mandatory challenger position in the ring, not once, but twice. He’s  been talking about fighting me for the last two years. It’s time!”

Bivol said this 1 ½ years ago: “Gilberto Ramirez is one of the top players in the light heavyweight division. We have talked about this fight for a long time. The time has come to make this a reality. We’ve trained together and sparred as well. He is a professional, gentleman, and a very good boxer.

“He is an ex-world champion who has proven to be one of the best. Fights like this excite fans. This is what boxing is all about, fights that either fighter has a 50-percent chance of being victorious.

Even Ramirez’ former promoter, Bob Arum (Top Rank), is on record saying Bivol vs. Zurdo should be next:

Arum noted that Bivol and Zurdo both fight on DAZN, while Beterbiev fights exclusively on ESPN, and Arum doesn’t want Beterbiev to fight Bivol on DAZN.

“So, my suggestion to Bivol is if the Canelo rematch isn’t available,” Arum recently said in an interview, “he should fight Gilberto Ramirez, who is promoted by Golden Boy, and Golden Boy and Eddie Hearn both do their fights on DAZN. So, it shouldn’t be a hard fight to make.”

Zurdo, of course, agreed with Arum: “I am not surprised by Bob’s comments. Bivol can’t just demand what he wants to Top Rank. It just doesn’t work that way. Canelo didn’t commit to the rematch, so now I’m curious what other excuses he (Bivol) might make to avoid me.

“My team and I still have a tremendous amount of respect for Bob and Top Rank. He is one of the greatest promoters and I will always appreciate Bob for giving me an opportunity. Although we disagreed, it doesn’t mean we can’t do good business together down the line. I still cherish all my time with Top Rank and wish nothing but the best for Bob and the Top Rank family.”

The boxing world is waiting for the WBA to order Bivol vs. Zurdo.