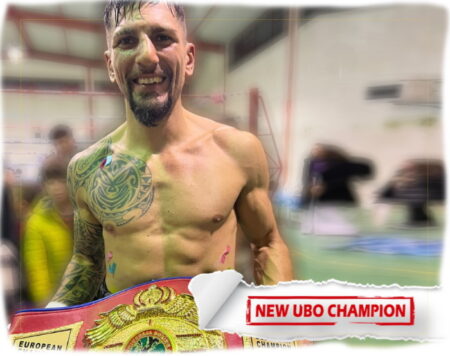 With only one stoppage in fourteen previous victories, one of the least likely scenarios was probably that veteran D´Antoni would emerge from the fight looking like a massive puncher.

But that’s what happened, as the 33-year-old started aggressively, switching between orthodox and southpaw, stalking Riccardo before landing a huge overhand right, followed by a left hook, sending Riccardo crashing to the canvas in the very first round.

Riccardo showed a big heart in getting back to his feet, but he was clearly hurt and the fight was waved off when he fell backwards into the ropes.

Registering his first knockout since his professional debut in 2010, in highly impressive fashion to boot, new UBO European champion D´Antoni improved his professional ledger to 15-10-3 (2).

Joshua Riccardo, still only twenty-five years old, falls to 5-1 (2) but will undoubtedly learn a lot from his first pro defeat.

Quite a few saw Riccardo as a very promising up-and-comer going into this fight, and gave him a good chance of winning, but he has plenty of time to come again and achieve big things if he doesn’t let the set-back break him.