Giyasov Retained His WBA-International Belt With a Knockout to López 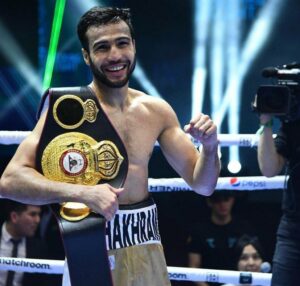 Shakhram Giyasov gave a demonstration of strength in his native Uzbekistan, where he knocked out Mexican Patricio López Moreno in three rounds and defended his International Super Lightweight World Boxing Association (WBA) crown on Saturday.

Giyasov made masterful second defense of his belt. The Uzbek, who occupies the sixth slot of the 140-pound ranking, kept control of the fight at all times against a brave Lopez but overcame him by the strength and incisive boxing of the champion.

In the second round, Giyasov sent Lopez to the canvas with mid zone punch. The Mexican got up and the bell rang to end the actions of the round. However, the third round continued the story and Giyasov kept attacking his opponent.

A straight right hand, followed by a combination to the mid zone again brought down the Mexican, who was left on the canvas in pain while the third man in the ring counted 10.

The “Wonder Boy”, Olympic silver medalist at Rio 2016, reached 11 wins and 9 knockouts, while Lopez now has a record of 28 wins, 5 setbacks and 20 knockouts.