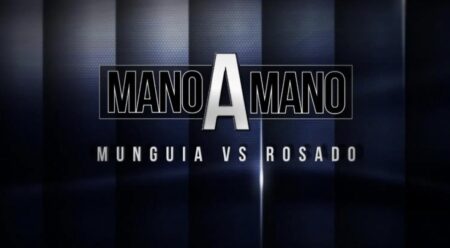 In anticipation of the soon-to-be epic fight between rising Mexican superstar Jaime Munguia (37-0, 30 KOs), and the warrior “King” Gabriel Rosado (26-13-1, 15 KOs), Golden Boy Media and Entertainment will release a series of new original content to countdown to the Mexico vs. Puerto Rico battle on November 13. The new content will examine the epic battles in the Mexico vs. Puerto Rico boxing rivalry, comment on the status of the middleweight division, and also break down what makes Jaime Munguia and Gabriel Rosado feared fighters.

In addition, the staple Mano-a-Mano, which is on its six-year-run, will dive deep into the fighting styles of Munguia and Rosado, as it chronicles each fighter’s struggles and triumphs in the sport. Munguia and Rosado are set to face off in a 12-round middleweight fight for the WBO Inter-Continental Middleweight World Championship at the Honda Center in Anaheim, CA, live exclusively on DAZN worldwide, excluding Mexico, starting at 6:00 p.m. PT/9:00 p.m. ET.

“I am so proud of the original content we were able to produce for Munguia vs. Rosado,” said Oscar De La Hoya, Chairman and CEO of Golden Boy and executive producer of Golden Boy Media and Entertainment. “When we first started Golden Boy Media and Entertainment, our goal was to tell compelling stories from the fighters’ perspective, but also, offer fun and engaging content for the boxing fan. And now, with the rollout of new original content for this fight in the middle of a pandemic, and with Mano-a-Mano in its sixth year, I can say we have gone above and beyond what was expected. I can’t wait to see what we can produce in the next upcoming years.”

Mano-A-Mano is an original production of Golden Boy Media and Entertainment, where Oscar De La Hoya serves as Executive Producer. The series has evolved from a television show developed for ESPN to an original content series that is tailor-made for the Facebook Watch platform. The series has led to the development of additional original content for social media platforms featuring exclusive interviews with fighters, trainers and promoters, along with exclusive footage, and a behind-the-scenes look into fighters’ training camps.

Munguia vs. Rosado is a 12-round fight for the WBO Intercontinental Middleweight Title presented by Golden Boy in association with Zanfer Promotions. The event is sponsored by Tecate “The Official Beer of Boxing,” Hennessy “Never Stop. Never Settle,” and “BetOnline – Your Online Sportsbook Experts.” The fight will take place on Saturday, November 13, and live exclusively on DAZN worldwide, excluding Mexico, starting at 6:00 p.m. PT / 9:00 p.m. ET.

Limited tickets for Munguia vs. Rosado are still available and are priced at $250, $150, $100, and $50 not including applicable service charges. Tickets will be available for purchase at ticketmaster.com. Please note that California Department of Health guidelines and other protocols relating to admission requirements may be in place for this event, which may include a requirement that all guests show proof of a negative COVID-19 test or full vaccination status.