Gorman vs. Salek headlines Wasserman card in Liverpool on June 17 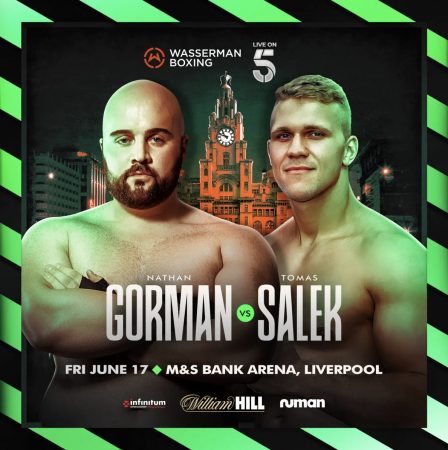 Nathan Gorman (18-1, 12 KOs) returns under the bright lights to headline an action-packed night of free-to-air boxing on June 17 at the M&S Bank Arena in Liverpool, promoted by Wasserman Boxing live on Channel 5 in association with William Hill, Numan and Infinitum Entertainment.

The hard-hitting heavyweight will face off against a confident Czech, Tomas Salek (17-3, 13 KOs), fresh from defending his national Heavyweight Title and looking to get into a firefight in this guaranteed earth shaker.

It has been over a year since Gorman last graced the ring, and the British power-puncher will be looking to pick up where he left off with a third straight win since his first career loss in 2019. A tremendous response since then, he will be looking to come back with a bang having missed a previous card due to illness.

“I’m coming there to throw the kitchen sink at him and put on a really good display,” said Gorman.

“I was due to fight on the Savannah Marshall show, but unfortunately, I came down with a bad illness. I believe things happen for a reason, and now I’m in a position to put on a good show with Channel 5. I’m just really looking forward to it.”

Standing in the way of a dream return for him will be 23-year-old Salek, who is coming to flex his greater knockout record on Gorman’s home turf. It will be an opportunity for Salek to right the wrongs from his previous appearance in the United Kingdom, and he’ll be insisting he puts on a spectacle to prove he has progressed.

“It is a big opportunity for me,” he said. “This will be my second fight in the United Kingdom, and I truly want to show that I am now much stronger physically, but mostly, much stronger mentally. I want to come back to the Czech Republic with Gorman’s scalp!”

Fans can also look forward to an electric British Super Flyweight Title Eliminator between two physically imposing fighters when ‘The Chosen One’ Marcel Braithwaite (12-3) will be aiming to get his fellow Liverpool faithful on side as he looks to get the better of the experienced former WBA Continental Bantemweight Champion Thomas Essomba (11-7-1, 4 KOs).

The M&S Bank Arena will be rocking when Braithwaite, the newly crowned WBC International Silver Super Flyweight champion, arrives to seize the spotlight and move towards ticking off more on his boxing bucket list.

“It’s a good fight. It’s perfect fight for where I’m at in my career and it feels like the stepping stone I need for me to get to the British title. That title is one of my ambitions, so I just need to put everything into my preparations to make sure I get there, which I will,” said Braithwaite.

“I’m really excited to have the chance to perform in front of my home crowd at such a great venue. I’ve always wanted to fight there, and that will be reflected in my performance. Everyone has Channel 5 too, I’ll be on two massive stages. It’s my time, and I’ll show that June 17.”

A rejuvenated Essomba comes to crash the Liverpool party off the back of necessary changes to his preparations. Singing all the right notes in the gym, he will be looking to control this fight as the older statesmen and kick on to a British Title.

“I’ve never had the training I have now. It’s the perfect time for me to show all the UK fans that I am a great fighter, and a great boxer. I have good people around me now and I believe in the work I’m putting in. People will see that Thomas Essomba deserves to be a British Champion, and maybe even more than that. For now, I’m only focused on the British Title. I know Marcel is a good fighter, and I respect him, but I am better.”

“The free-to-air revolution continues on June 17 as we head to the fantastic fight city of Liverpool for another outstanding night of boxing live on Channel 5,” said Wasserman Head of Global Boxing, Kalle Sauerland. “This time we have the big boys in action. Nathan Gorman is from fighting stock. He is an exceptional talent who we believe can go all the way. He faces a tough test in what should be a fan friendly affair against the big punching Tomas Salek. Alongside this exciting heavyweight attraction we will have an abundance of local talent showcasing their skills in front of the what I expect will be a lively audience at M&S Bank Arena.”