Hafthor Bjornsson Opens Up on the Steven Ward Bout 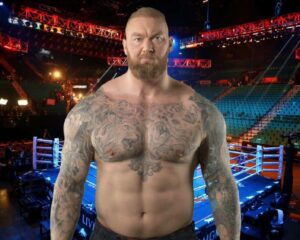 Hafthor Bjornsson sees his exhibition bout with Steven Ward as the perfect preparation for his upcoming showdown with his ‘biggest enemy’ Eddie Hall.

Former World’s Strongest Man Bjornsson faces Ward over 3 x 3 minute rounds at the sold out Conrad Dubai, with viewers around the world able to watch the bout on coresports.world on Saturday.

Strongmen rivals Bjornsson and Hall are set to square off later this year in a fight being dubbed as ‘The Heaviest Boxing Match in History’ – and the man known as ‘The Mountain’ has opened up on that clash, and why he is taking on Ward.

Bjornsson told IFL TV: “The main reason to get involved in this is I wanted to challenge myself. I won everything I can win in Strongman competitions, and now I have got this opportunity to fight my biggest enemy Eddie Hall.

“It was a great way to focus on something else. I get to give my body a break from being so heavy. I was close to 200kg for almost a decade, and that’s not healthy for your body long term, so I decided to do something knew.

“I had never trained boxing before, so we will see how it goes. I’m fighting Steven Ward who is a professional fighter with a great record. He is fast, powerful and a similar height to Eddie Hall.

“The weight difference is there, but this fight is all about ring experience for me. I have only been training for six months and I have never done it before, so I’m excited for this exhibition.

“This is huge preparation for my fight with Hall. It’s one thing training in the gym, but to be preparing for an actual fight and experience the travelling, the pre-fight stuff, having a referee there and understanding the rules of boxing, it’s all new.

“I hope Eddie does this as well as I want him to be at his best. I don’t want him making excuses that he didn’t have the preparation I had. I believe if he doesn’t do this then I’ll knock him out in the first round.”