Hafthor Bjornsson vs. Steven Weigh-In Ahead of Exhibition Bout 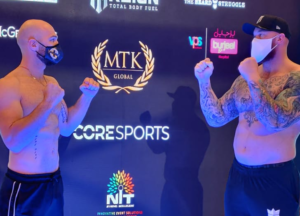 Steven Ward and Hafthor Bjornsson took part in their weigh-in on Thursday ahead of this weekend’s highly-anticipated exhibition bout.

The two men meet over 3 x 3 minute rounds at the sold out Conrad Dubai, with viewers around the world able to watch the bout on coresports.world on Saturday at around 4:30pm GMT (8:30pm local time).

Bjornsson is set to take on strongmen rival Eddie Hall in a fight being dubbed as ‘The Heaviest Boxing Match of All Time’ later this year, and sees MTK Global working with CoreSports to serve as the official boxing advisors for the clash.

Before he turns his attention to the fight with Hall in September 2021, he will get some rounds under his belt when he first meets Ward in this weekend’s intriguing battle.