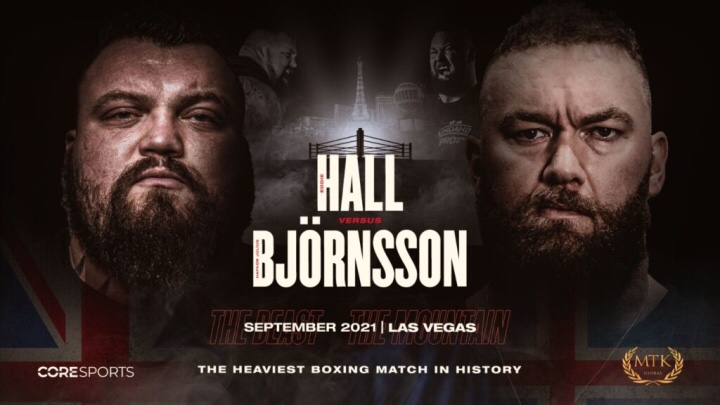 MTK Global has announced that it will serve as the official boxing advisers to Core Sports for the upcoming boxing match between strongmen Hall and Bjornsson.

The clash is billed as ‘The Heaviest Boxing Match in History,’ and is set to see long-time rivals Eddie “The Beast” Hall and Hafþór “the Mountain” Bjornsson go head-to-head in Las Vegas in September 2021.

Hall holds a number of incredible accolades, including winning the 2017 World’s Strongest Man, and also winning UK’s Strongest Man every year from 2011 to 2016.

Bjornsson’s resume is just as impressive, with the man known as ‘Thor’ winning the 2018 World’s Strongest Man, 2018 World’s Ultimate Strongman, 2018 to 2020 Arnold Strongman Classic and winning Iceland’s Strongest Man every year from 2011 to 2020. He is also known for playing Gregor ‘The Mountain’ Clegane in the critically acclaimed HBO series Game of Thrones.null

That only helped to further the rivalry between the two strongmen, and they are now due to settle their differences inside the boxing ring.

Eddie “the Beast” Hall said: “I’m training for this fight like I trained to be the strongest man in the world, no stone unturned and anyone in my way is getting milled down!

“With the experience MTK Global brings to the table, this event will be even better than it was going to be. As for the fight itself, I have zero doubt in my mind that crybaby Thor is getting folded in half and sent packing back to Iceland.”

Hafþór “the Mountain” Bjornsson said: “I’m very excited with MTK Global’s involvement as this is something I’ve been taking very seriously and I want others to know how serious this fight will be! I’ve been extremely focused and dedicated in my training as always and I am looking forward to getting in that ring!”

Core Sports CEO Don Idrees said: “What would happen when two of the biggest, strongest, most dedicated athletes on the planet cross over to a different sport and put their heart and soul into a new endeavor? If that wasn’t exciting enough, having the biggest force in boxing as our advisors takes this fight, which risked being seen as one dimensional, to a whole new level. This will be a spectacular and inspiring story to be talked about for years to come regardless of who wins.”null

MTK Global Chief Strategy Officer Paul Gibson added: “It’s great to be involved in this event. In boxing it tends to be the big men who receive most of the attention and it is difficult to find two bigger athletes than Thor and Eddie.

“I’ve been pleasantly surprised watching footage of their training and sparring. There is a personal and very genuine grudge between the two and that is driving both to take the contest extremely seriously.

“From fighter preparation, to operational and logistical advice, to the overall commercialisation of the event, our experience and expertise at the highest level of professional boxing will help make the event a huge success.”