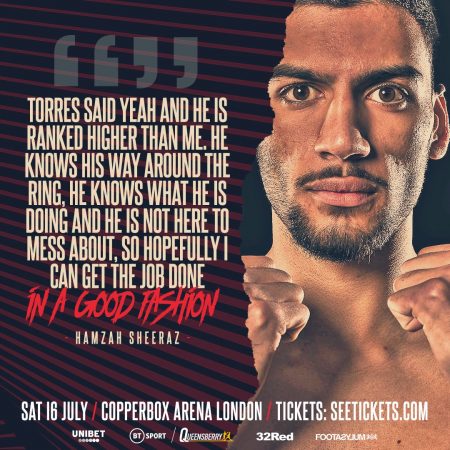 Hamzah Sheeraz is back on British soil following his US preparations for his headline act at the Copper Box Arena on July 16 in a challenge for the vacant WBC Silver middleweight title, live on BT Sport.

Sheeraz, just 23, takes on Francisco Emanuel Torres in what will be his second fight at 160lbs following his second round stoppage victory over Jez Smith last time out in March.

The former WBO European Super-Welterweight champion – 15-0 (11 KOs) – foregoes his home comforts for the duration of training camps to work under the experienced Ricky Funez at the Ten Goose gym in Los Angeles and he is happily living out his California dream.

“It is great to be back, but I accepted two camps ago that I would be working in America for most of my life,” said the Ilford native. “As long as I keep winning and doing my thing, I will be there training most of the time.

“I am willing to dedicate myself to my craft and give it nothing but 100%. Boxing is about sacrifice at the end of the day and to be great you have got to sacrifice the pleasures in life. Not totally, and become depressed or anything, only for camp.

“This is probably the smoothest camp I’ve had and it is my fourth with Ricky now. We’ve gelled and we’ve got a good understanding of each other. He understands me more as a fighter now, how I move and do things. It is good and I can’t complain.”

We don’t just have to take Hamzah’s own word for it that he is an improved version of himself by training Stateside, he has had it on good authority from a couple of legendary trainers and believes he is the best he has ever been.

“Without a doubt, it is a cliche thing to say, but I think I will be. I’ve been going to the Wild Card gym for sparring and even the coaches there are saying I have come on leaps and bounds. If you’ve got the greats like Freddie Roach and his understudy Pep, as well as Joe Goosen telling me I’ve come on then I am pretty sure I have.”

So with his Torres test looming, the Boxing Writers’ Club Young Boxer of the Year knows he is not in for an easy ride against an in-form fighter who, last time out, fought out a draw with Jose Benavidez Jr.

“Of course, there were loads of names chucked at us – world level names as well – and we said yes to all of them. Torres is the one who said yeah and he is ranked higher than me. He knows his way around the ring, he knows what he is doing and he is not here to mess about, so hopefully I can get the job done in a good fashion.

“Hopefully I will win this fight and get a top six ranking with the WBC. Once you are there, in a few more fights, I could get myself either into a mandatory position or the champion might decide to have a voluntary defence. If they choose me then happy days!” 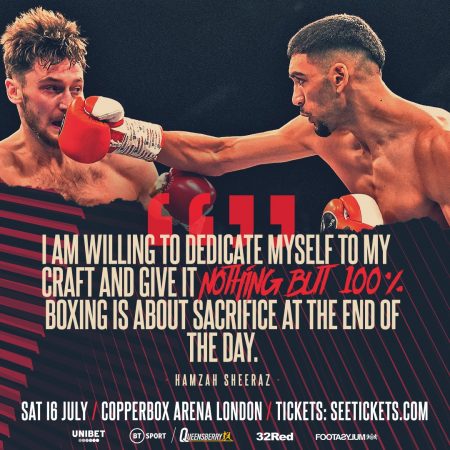 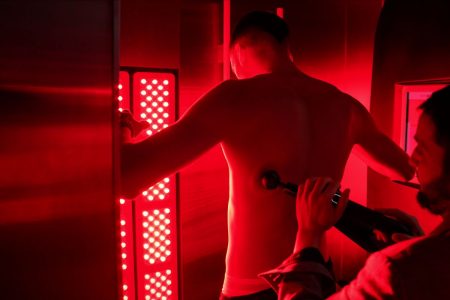