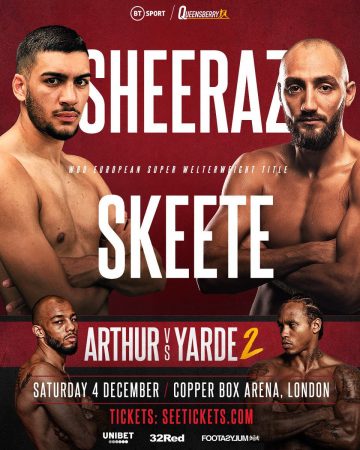 Hamzah Sheeraz reveals that he is inspired by the idea people are doubting him ahead of the biggest test of his career against Bradley Skeete at the Copper Box Arena on Saturday, live on BT Sport.

The unbeaten 22-year-old spent Monday afternoon at the old Peacock Gym along with the home fighters from the undercard for a media event ahead of the traditional formalities of the final press conference and weigh-in at the back end of the week.

Despite his suspicions over people harbouring reservations over his prospects against the 34-year-old Skeete, Sheeraz cut a confident figure in Canning Town – typically sporting his Arsenal winter coat – although he acknowledged that the former outright British champion and WBO European title holder at welterweight is a step or two up on the ladder for him.

“It is a great fight, I am looking forward to it and it is definitely the biggest fight of my career,” said the WBO European champion at super welterweight. “Experience-wise, in terms of rounds, knockouts, titles – he has ticked all the boxes. If you compare my record to his, I’ve ticked barely anything and he has ticked nearly everything.

“It is going to be an amazing fight and I am more than confident that I am going to get the job done. I’ve had a great camp and I am honestly buzzing,” he continued, before answering whether this should be considered a 50-50 fight.

“I’d say so. If anything it is probably more a 60-40 in his favour on paper. In terms of how I look at it personally it is 100% my way, but obviously I’ve got to prove that come Saturday night.

“It is kind of refreshing to hear people doubting me. I know it sounds a bit weird, but I am kind of enjoying it as this is better than jumping in the ring with someone you expect to get out of there in six rounds.

“If I was to knock him out between three and six, or even the 10th, it would be a great achievement.”

‘Super’ Skeete will present a puzzle for Sheeraz even before a punch is thrown because he won’t know whether to expect the tricky and defensive version of old or a more aggressive newer model.

“We have prepared for both and he says he is going to smash my face in. From interviews and how he is portraying himself, it seems like he is going to come all guns blazing, so hopefully he will meet me in the middle and make it an exciting fight. Although, to be honest, I don’t really see that happening.

“I can just see him boxing, switch-hitting and just being sharp as he always has been. I am kind of expecting the best version of him because it is his last chance.”

In the bill topper Manchester’s Lyndon Arthur (19-0, 13 KOs) defends his Commonwealth and WBO International Light-Heavyweight title against Ilford’s Anthony Yarde (21-2, 20 KOs) in a rematch of last December’s controversial clash that he won on points.