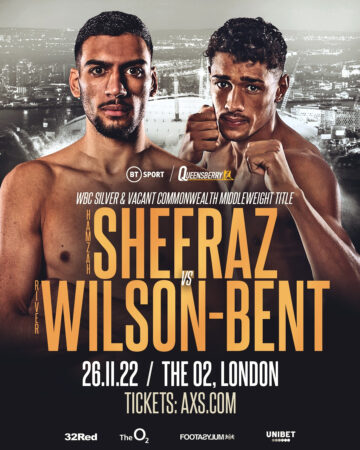 Hamzah Sheeraz will bid to add the Commonwealth middleweight title to his WBC Silver belt when he takes on the highly-rated River Wilson-Bent at the 02 Arena on November 26, live on BT Sport.

Zach Parker vs John Ryder tops the bill at the popular Greenwich venue, with Dennis McCann (against Joe Ham) and Sam Noakes (against Calvin McCord) also fighting for Commonwealth titles on the night at super bantamweight and lightweight respectively, while Pierce O’Leary takes on Emmanuel Mungandjela with the WBC International super lightweight title at stake.

Along with the Commonwealth title, Sheeraz (16-0, 12 KOs), 23, will be making a first defence of his WBC Silver title he won last time out by defeating Francisco Emanuel Torres via a fifth round stoppage. He previously won the WBC International Silver title with a defeat of Jez Smith and is a former holder of the WBO European title at super welterweight.

Wilson-Bent (13-1-1, 6) enjoyed a perfect run in the professional ranks until coming up against forthcoming British title challenger Tyler Denny. Their first encounter in November of last year ended up as a draw on the scorecards following an epic English title battle, before Denny prevailed in the rematch via a split decision.

The 28-year-old has previously won and defended the Midlands Area title against unbeaten opponents in Troy Coleman and George Farrell and recently returned to winning ways with a fifth round stoppage of Ben Thomas.

Promoter Frank Warren commented: “This is going to be some night of boxing! We’ve now got four major domestic title fights on the bill, with all of them near enough even-money. This is a show tailor-made for British fight fans.

“We explored a number of options when it came to choosing an opponent for Hamzah. He is still pretty new to the weight division, with having just two fights at 160lbs, so we determined that a tough domestic test will serve him best at this stage.

“River has fought on one of our Birmingham shows previously, so we know his quality and also know that he will view this as a breakthrough opportunity and will give it his absolute everything.

“This is the sort of examination Hamzah needs and I feel certain it will be a competitive and entertaining fight on what is already an exciting card. Having the Commonwealth title on the line is a big bonus and the winner will be firmly in line for a shot at the British title.”

Tickets for Zach Parker vs John Ryder for the WBO Interim Super-Middleweight Championship at The O2 are on sale now, available from axs.com.