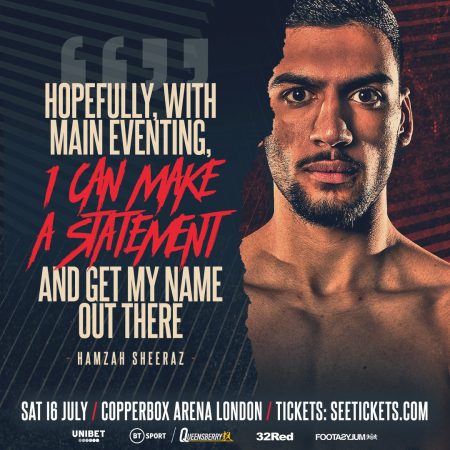 New middleweight star Hamzah Sheeraz is set to record another career first on July 16 when he tops the bill for the first time at the Copper Box Arena, where he takes on Francisco Emanuel Torres, live on BT Sport.

Sheeraz, just 23, introduced himself to the middleweight division back in March with a resounding defeat of the usually highly competitive Jez Smith, who lasted just 38 seconds into the second round.

The Ilford man, who picked up the WBC International Silver title for his triumph, is being rewarded for his rapid progression with the headline spot at the Copper Box against an in-form Argentinean fighting for the vacant WBC Silver title.

“It is an amazing feeling, it almost feels like I am at that next step of my career, slightly finishing off being a prospect and starting to be somebody who gets recognised seriously in the 160lbs division throughout boxing,” considered Sheeraz, who prepares for fights in the sunshine of Los Angeles.

“Hopefully, with main evening, I can make a statement and get my name out there.”

Torres, who is unbeaten in 10 dating back to early 2018, achieved a notable result last time out when he shared the spoils with the highly rated world title challenger Jose Benavidez Jr in Phoenix.

“I will be bringing mine and hopefully I will be too much for him on the night.”

Hamzah Sheeraz fights for the vacant WBC Silver middleweight title against Francisco Emanuel Torres on July 2 at London’s Copper Box Arena. The British, Commonwealth and IBF European super middleweight titles will be on the line when Lennox Clarke and Mark Heffron meet in what should be a blockbuster battle between two big punchers.