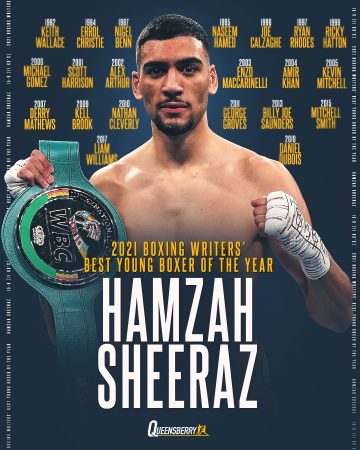 Hamzah Sheeraz was honoured by the Boxing Writers’ Club with the prestigious Young Boxer of the Year award this evening in London.

The 22-year-old achievements were acknowledged at the 69th annual dinner at the Savoy Hotel.

Middleweight Hamzah, 15-0 (11 KOs), is the current holder of the WBC International Silver title following his defeat of Jez Smith at Wembley in March, with him previously having won the WBO European title and defended on four occasions at super welterweight.

“I am delighted to see Hamzah following in the footsteps of Daniel Dubois in winning the Young Boxer of the Year award, voted for by the boxing writers,” said promoter Frank Warren.

“It is a coveted honour that has been won by many greats of the past and, if Hamzah fulfils his huge potential, he will rightly belong in such company.

“Hamzah is totally devoted to his craft and him taking himself off to the United States to improve speaks volumes for his dedication. I genuinely believe he is a future world champion at middleweight.”