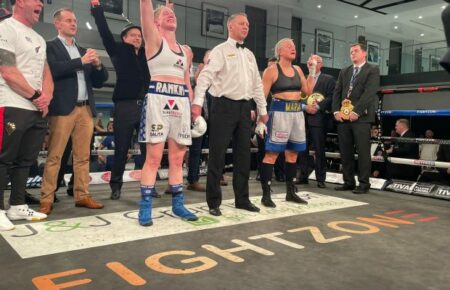 Hannah Rankin is now a two-time and double world champion after unanimously outpointing Maria Lindberg for the IBO and WBA World Super Welterweight Titles on a balmy evening at the Tottenham Hotspur Football Ground on November 5.

Underneath the hot lights of the Fightzone cameras, Scotland’s Rankin and her Swedish opponent left it all in the ring after 10 hard rounds of action that, at times, seemed hard to score.

As expected Lindberg – who was in great shape – wasn’t hard to find, as she stood in front of Hannah and kept ploughing away. The Scot’s jab fell short on occasions in the first half of the fight but found a home as the fight wore on. After a first round that was hard to spilt them, Rankin was the more aggressive in round two and in the third landed a series of right hands that saw her on top at the end of the round.

Round four was more competitive with both having success and in round five the Brit was busier, but Lindberg was having the last word at times with her shorter punches. Round six and seven also were close, but Hannah was landing the more eye-catching shots with left hooks and right hands in particular.

In the championship rounds, ringside analyst Glenn McCrory had them neck and neck going into the last two but again – although the Scandinavian fighter lived up to her buzzsaw reputation – Rankin appeared to do the cleaner work and better boxing.

At the final bell, both women raised their gloves in anticipation but, after a nervy wait, Rankin was declared a handy winner on all three of the judge’s scorecards.

Emotional afterwards, the 31-year-old – who had previously held the IBO belt – thanked her promotional and management team of Dennis Hobson, Steve Crump and Sam Kynoch and can now look forward to some huge title defences, ideally back in her home country.

Also on the bill, Nathan Mizon lived up to his ‘Mr Excitement’ moniker by stopping Czech foe Jan Prokes in a round.  Mizon came out of the blocks far too quickly for Prokes, 1-17-3, with the East European electing to sit out the ten count after being backed up and then put over with a solid right hand to the head.  The well-supported Mizon from Surrey moves to 2-0 (1).

The chief support between Michael Gomez Jr and Sufi Ahmed was highly-anticipated and certainly lived up to expectations. The vacant Central Area Super Featherweight Title was on the line and with Sheffield’s Ahmed missing the weight at the first attempt on the scales, temperatures were raised ahead of the contest with Gomez chiding his opponent and threatening to ‘walk through him’.

In an even and frenetic first round of a scheduled ten, the tone was set the for the contest with both men meeting in the middle of the ring, going head-to-head and throwing leather non-stop. Both fighters had success in round two but the sense was that Manchester’s Gomez Jr was the stronger man and wouldn’t be denied.

Ahmed was brave, refused to back down and tried to match his opponent shot-for-shot but Gomez’s work was clever, touching to the body and head before slamming in heavy, damaging punches.

The end came in round four, the Mancunian was absolutely relentless, continued to walk down his Sheffield foe before eventually overwhelming Ahmed, trapping him on the ropes with a series of head shots that saw the ref calling off the action after 59 seconds.

Also on the bill, East Kilbride cruiserweight David Jamieson looked composed as he went through the gears before wearing down late replacement opponent Dave Preston with some wincing body shots.  The end came in round two after a punch to the head had Midlander Preston down on his haunches, with the referee rightly waving it off.

Preston came in at one days notice.

Heavy-handed Jamieson is now 7-1 (5), and with 11-0 (5) Norwich man Iain Martell an interested and unimpressed ringside spectator  – a New Year match between the pair would be a contest that will pack out the rafters.

The evening was also a memorable night for Glasgow-based Norfolk fighter, Lilyella Craw-Seaman.   The debutant – with Scottish ring legend Gary Jacobs in her corner – never stopped coming forward as she shed the nerves to run out a 60-54 winner over six-twos against the Czech Republic’s Ester Konecna, 1-11-1.