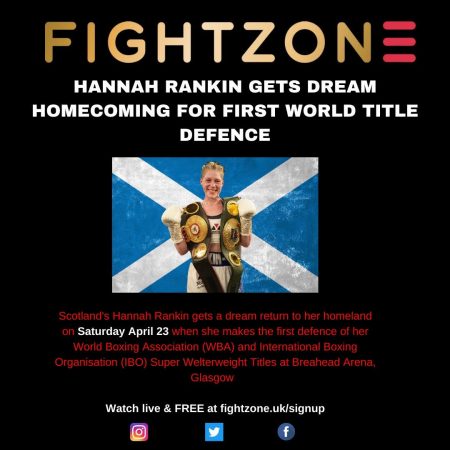 Scotland’s Hannah Rankin gets a dream return to her homeland on Saturday April 23 when she makes the first defence of her World Boxing Association (WBA) and International Boxing Organisation (IBO) Super Welterweight Titles – with all the action broadcast LIVE and FREE on Fightzone.

Glasgow’s iconic Braehead Arena will be the venue as Hannah gets a lively Mexican test against Alejandra Ayala who has won 14 of 19, including eight KOs.

Rankin – Scotland’s first ever female world champion – is one of Britain, and the world’s, best women fighters.  A two-time and now double world title holder, the 31-year-old is in career best form after beating Swedish veteran Maria Lindberg in November last year to claim the vacant belts.

Ayala, 33, is no stranger to British fight fans, having visited the UK previously, suffering defeat to middleweight star Savannah Marshall in 2018.  More tellingly though, she has also been the distance twice – sharing 18 rounds – with current IBF World Super Welterweight Champ, Marie Eve Dicaire from Canada.

Now 11-5 (2), Hannah cannot afford any slip ups against Ayala, with some huge unification bouts seemingly on the horizon.  As well as IBF ruler Dicaire; the division is now red hot after fellow Brit Natahsa Jonas claimed the WBO portion of the world title with a two round KO of Uruguay’s Chris Namus at the weekend.

Ahead of the announcement, Hannah says she is ecstatic to be fighting in Scotland against Ayala, and believes she has the beating of Liverpudlian Jonas if the unification fight can be made.

“I’m really excited about fighting Ayala.  I’ve always wanted to fight a Mexican, and it’s a bit of a running joke that I fight like a Scottish-Mexican, so it’s a great match and will be an exciting fight for the fans to watch.  She’s a good opponent to share a ring with, has lots of experience with the people she’s fought, but she won’t have come up against anything like me, so it’s going to be great to watch.

“This is a good solid opponent for my first world title defence.  She’s been the distance twice with Marie Dicaire who has the IBF at 154 [lbs] and that’s a title I’d love to get my hands on.

“It was also a great performance from Natasha at the weekend, and I’m really happy for her and Joe [Gallagher] that she’s finally got her hands on a world title.  I wasn’t expecting her to come up to super welterweight, but it makes for a good mix.  Chris only had two weeks notice and I don’t think she was happy with her performance but well done to Natasha, you can’t take anything away from her.

“It’s exciting to have Natasha in my division and that WBO belt is another that I want to get my hands on.  I’d back myself in that fight, one hundred per cent.  I’m a big 154’er and Natsaha is coming up to the weight, but she has that Olympic-pedigree and skill set – so it makes the fight even more exciting.  I’m more experienced as a pro, you’ve got England versus Scotland, everybody would get into it and it would be a great fight for women’s boxing.

“At the moment though I’m fully focused on Ayala.  To be fighting at the Braehead Arena, you can’t ask for anything better.  A homecoming for my first defence with two titles on the line, headlining the event and a chance to showcase my skills – what could be better!  I’m helping to put Scotland on the map, the venue is amazing, there are lots of great Scottish boxers who’ve fought there before and I’m looking forward to getting all my fans along.

“Fightzone are doing an absolutely fantastic job of supporting Scottish boxing, they’ve broadcast shows from all over and this is another great chance for Scottish boxing to really showcase itself.”

Manager Sam Kynoch, stated: “This is a tough Mexican opponent and a good choice for Hannah’s first defence.  The Mexicans always come to fight, Ayala has been in with some world class operators so it’s a good fight for Hannah.  There are potentially some massive fights in the future out there for her in this division, so this is a must-win fight and not one we’re going to overlook – we know the importance of it.  The undercard for this show will  be great and with a female headliner, this really is a pivotal event for Scottish boxing.”

“Scottish boxing is flying at the moment and I’m not sure it’s ever had as much coverage as we’ve given it at Fightzone,” said Chief Operating Officer, Asif Vali.  “We’re fully backing Hannah in her career, she’s already made history by becoming the first ever female world champion ‘North of the Border’ and it was a great moment in November last year when the Fightzone cameras captured her winning those two world title belts.

“We’re delighted to be screening her first defence.  The Braehead Arena is a great venue, the atmosphere will be incredible for her homecoming, and the card will be stacked with Scottish talent.  To top it all off, all the action can be watched absolutely free – so it really is amazing for boxing fans.”

Tickets will be available from Braehead Arena from Friday March 4th.