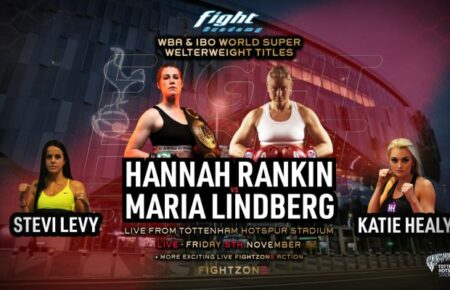 A big night of boxing just got even bigger with the news that Hannah Rankin and Maria Lindberg will now be involved in a double world title fight on November 5 at Tottenham Hotspur FC’s Banqueting Hall.

Originally due to battle for the World Boxing Association (WBA) Super Welterweight crown, the pair will now also square off for the International Boxing Organisation (IBO) belt, after the governing body agreed to sanction the contest – with all the action broadcast live on Fightzone.

Rankin has an affinity with the IBO World Title, having previously won it in June 2019, and the 30-year-old would dearly love to get her hands back on the coveted prize.  To do that, she will need to put in a career best shift against her much more experienced opponent.

Lindberg has lost just seven times in 29 outings, and has stopped 10 opponents. A former world champion herself, having previously held the International Boxing Federation (IBF) crown, the Swede will put it all on the line against Rankin, knowing this is possibly her last chance at the big time.

Rankin has won 10 of 15 contests, but has tested herself against some of the world’s best fighters – including Savannah Marshall and Claressa Shields.  Both Hannah and Lindberg have lost inside the distance to Marshall, but on each occasion that was up at middleweight and the Scot says she is reading nothing into those defeats.

“I’m definitely not underestimating Maria; she’s won world titles herself, has been around and fought some top opposition. She’s going to want to win this and I respect her skills.

“I’m not taking anything from her loss to Savannah Marshall either [Lindberg lost in three rounds – April 2021], she took that fight at something like two days notice and she isn’t a middleweight.

“Maria is a tough fight, she’s been around the game a long time, and it would be stupid to underestimate her.  I am not taking her lightly.”

Also confirmed for the big London bill are Wolverhampton’s Katie Healy and Norfolk’s Stevi Levy, with the rest of the undercard to be announced shortly.

Efe Ajagba vs. Frank Sanchez this Saturday – someone’s ‘0’ has got to go Gervonta and Romero will fight on December 5 for the WBA belt