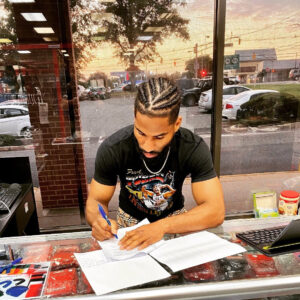 Young, 33 of Atlantic City, New Jersey has a record of 22-2 with eight knockouts.

Young is a 10 year-professional who has developed into one of the most popular fighters in the Tri-State area.

“At this point in my career this is the right move. I am not a spring chicken and they know the direction that I need to go in my career. I want to make Atlantic City like Las Vegas. They have a great deal with the Showboat, and I feel that with me fighting in sold out shows there, I can help bring Atlantic City back as a big boxing destination,” said Young.

Said Manny Rivera of Hard Hitting Promotions, “We are excited and honored to sign Anthony “Juice” Young. We recognize that he is among the best 147-pounders in the world right now. Unfortunately he was not able to capitalize on that great win over Sadam Ali. Our goal and mission is to place him at the top of the welterweight division. He will be headlining our next event on September 25th,”

Young became a household name in the boxing world when he scored an emphatic 3rd round stoppage over former world champion Sadam Ali (27-2) on May 4, 2019 in Las Vegas. With that win, Young won the WBC USNBC Silver welterweight title.

Young is coming off a unanimous decision over Todd Manuel on July 31st at The Showboat Hotel in Atlantic City.

Young is managed by Carlos Rosario of STB Management.

Expect to see Young back in action on September 25th at The Showboat Hotel in Atlantic City.