Harry Garside pulls out of Gallen vs. Hodges & Hannant undercard 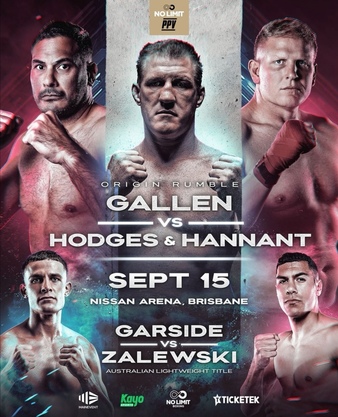 A hand injury has unfortunately forced Harry Garside to withdraw from his upcoming Australian Lightweight title defence against Miles Zalewski scheduled for Thursday September 15 at Nissan Arena in Brisbane.

Garside, who aggravated the injury during a recent training session, is disappointed that he will not be fit to fight on one of the most exciting and intriguing nights in recent boxing history with Paul Gallen set to face former Origin rival Justin Hodges and Ben Hannant on the same night.

The stacked Brisbane card will take place as planned on September 15th and will be televised live on Foxtel’s Main Event and Kayo Sports, with fight favourites Joe Goodall, Jack Bowen and Ty Telford all still in action.

No Limit Boxing CEO George Rose said: “Losing Harry on our wildest card of the year is unfortunate, but as they say in the entertainment business ‘the show must go on’!

“The Origin Rumble is going to be an incredible evening of entertainment and the moment isn’t lost on Paul Gallen as to what he is attempting to do.

“He’s been hated up here since the day he pulled on a Blues jersey but what he is trying to do is next level. He’s attempting a boxing feat no one has attempted in 132 years [fighting two guys in one night] and he’s trying to do it in the very same city where he failed to raise the State of Origin shield on a single occasion during his career.

“This is it. This is Gal’s final chance to avenge the decade of dominance demons that have clearly haunted him for so long and I can’t wait.”

“Tickets are moving faster than an Origin decider at Suncorp so get in quick if you want to be a part of history.”

Harry Garside said: “I’m sorry to everyone that was excited to see me back in the ring that I won’t be there next week, especially to my opponent.”

“I was only with Miles doing a promotional shoot last week and I know he put himself through a massive camp just like I did but I have to listen to my doctors and my team as I am only at the very beginning of my boxing journey.

“It’s definitely challenging mentally and physically because you put so much on yourself to be at the absolute peak come fight night but I couldn’t risk my future by going into a fight less than 100%.

“I do appreciate the fans’ support and I know Matt and George at No Limit Boxing will be looking to get me back in the ring as soon as possible when I’m good to go again.”

A massive fight week in Brisbane is planned next week with the official press conference and weigh in open to the public at the iconic King George Square in the heart of the Brisbane CBD. Rugby league and fight fans are encouraged to come down and show their support wearing their respective Origin colours.

Heavyweight Joe Goodall returns to the ring against Arsene Fosso after his last up loss to Justis Huni, Ben Hussain takes on Lachlan Higgins in a middleweight contest, while Ty Telford returns to take on Vanlalawmpuia and local prospect Jack Bowen steps in against Danny Geale’s former conqueror Renold Quinlan.

Ben Vaughan looks to keep busy, out next on September 9 The task of Zorrro: Ellis Zorro vs. Dec Spelman Sept. 16