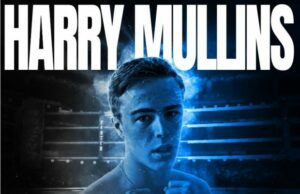 2020 National Amateur Champion Harry Mullins has signed a long-term deal with Dennis Hobson’s Fight Academy ahead of his professional debut on Friday June 5.

After successfully capturing National Championship honours , Mullins was scheduled to compete at the European championships due to be held in Moldova in April 2020 but the event was cancelled due to the pandemic.

“I had time to think when the European championship got cancelled and decided I didn’t want to wait about and wanted to push on into the pro ranks.” said the young, professional newcomer.

He continued, “I’ve been dreaming of it since I was a kid. You see it all on tv and think I want to do that one day, and now I have that opportunity.

“I can fight in the pocket and then if I want to be comfortable and look slick on the back foot, I can do that to. I have always believed my style suits the pro game. I’m no one-trick pony waiting to be found out, I can change it up if I have to.”

The 18-year-old light flyweight fights out of the Churchills Boxing Gym in South London under the tutelage of his Father, Sam Mullins and is managed by Sam Kynoch.

“I feel like I have the perfect team around me who all have my best interests in mind. We all work well together, and they look out for me. I know that they will get the best fights for me at the right time for me to push forward, so I’m very comfortable around them and have all my trust in them.”

Mullins will make his debut on Friday June 5 on the undercard of the upcoming Fight Academy show headlined by the British super bantamweight final eliminator clash between Marc Leach and Thomas Essomba, live on Fightzone; an opportunity the young Londoner eagerly awaits.

“A lot of fighters don’t get the opportunity to have their debut on tele so I’m grateful to be able to do so through Fightzone.

“Fightzone viewers can expect fireworks on June 5th. It is going to be a fast-paced display of boxing on the front-foot and back-foot, which is going to turn some heads, then I want to get back out as soon as possible.

Miguel “Alacran” Berchelt Plots The Path Of Return Jermall Charlo: It’s A Dream Come True To Be Able To Fight In My City