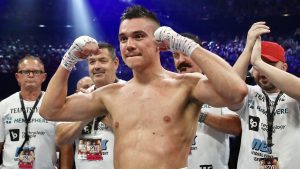 With his recent win over former world champion Jeff Horn, Tim Tszyu does appear to have the world at his feet. This view is echoed by Hall of Fame promoter Bob Arum of Top Rank:

“He looks terrific, he looks like he’s the real goods,” Arum told The Age. “It’s like race horses. Sometimes you can tell the colt is going to be good because the sire was good. It was on ESPN+, the streaming service of ESPN, which now has 11 million subscribers. He looked really good.

“I talked to Matt, his manager and promoter, and he said he wanted him to fight again before the end of the year in Australia and then he would bring him over to the United States.

“There’s no mistaking the resemblance,” Arum added. “Kostya Tszyu was a tremendous fighter. You can’t make comparisons. Kostya was fighting at a much lower weight. I hate to make comparisons between fighters in different eras, no less the father and the son.

“A world title is possible, but let’s not jump. He’s still a baby and needs a little bit more schooling. But I would think he’s about a year away. Probably by the end of next year he will be in a position to compete for a world title with a real good chance to win.”

It will be interesting to see who the next fighter will be. So far, all boxes have been ticked and how far he can go will be very interesting now he has been let off of the leash. As the son of living legend Kostya Tszyu, he certainly has a high marker to be judged against. One thing is for sure in this day and age, he will pick up a world title of sorts. Which one and for how long he will hold on to it will be the question.

“I’m Thinking About The People That I Want To Punch in The Face” – Tyson Fury “Hopefully We Can Make a Deal, I think it will Happen” – Joseph Parker (Junior Fa Update)