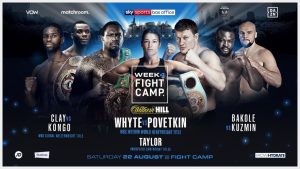 We have seen many confrontations at press conferences, weigh-ins, hotel lobbies and even a car park (who remembers Larry Holmes running over cars to drop kick Trevor Berbick – click > here < if you have never seen it)….this is the world of fighting even if sometimes it becomes the not so noble art.

On 22nd August, WBC No.1 contender Dillian Whyte (27-1, 18 KO’s) meets former world champion Alexander Povetkin (35-2-1, 24 KO’s) for the interim world boxing council (WBC) heavyweight title, the winner staying relevant and in the mix with the top tier heavyweight elite (even if Whyte is and has been No.1 contender for over 1,000 days).

Taking place at Matchroom Boxing’s Fight Camp (Sky Sports PPV) with the Katie Taylor (15-0, 6 KO’s) vs Delfine Persoon (44-2 (18 KO’s) rematch on the undercard, Eddie Hearn has expressed concern over the possibility of an altercation of sorts between the two heavyweights. With Whyte’s track record of confrontations, he has a point:

“Katie Taylor and Define Persoon is super icy, they don’t like each other and there’s already bad blood, but I think they’ve got enough about themselves to keep themselves to themselves. What we don’t want to see is Alexander Povetkin and Dillian Whyte rolling down that hill, onto the A12 and having a tear up. We’ll save that for Saturday night, Sky Sports Box Office. But I do have concerns that I’m raising to the British Boxing Board of Control. I spoke to Dillian Whyte earlier, we’re talking about potentially hiring a Winnebago for him to live in, in a secluded area, quarantined off, attached to the hotel.

“Bit quirky I know, but I’m struggling to find another solution. We’ve got these regulations and responsibilities in place in terms of quarantine and testing, but we also have a big concern that everybody is on top of each other. You can’t ignore people, you can’t stay away from people. And Dillian Whyte in fight week is not a pleasant individual, to be honest with you. So for the safety of the event I would like to find a way to segregate Whyte and Povetkin for next week.”

With the current set up of COVID-19 fight week conditions, this could prove difficult. What could possibly happen and what exactly can be done about it is a task and a half, I wish Eddie Hearn and the team the best of luck.

‘Friction’ can only boost PPV purchases, as long as the fight still goes ahead with no complications, the world will be treated to a fantastic night of boxing which combined with Fight Camp’s theatrical display and first class presentation, many fans will be entertained which is what this is all about.