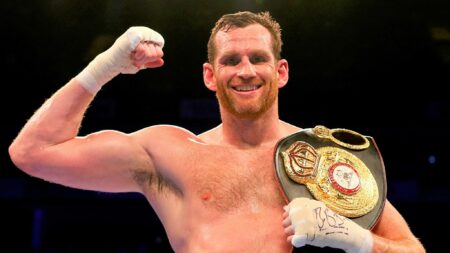 David Price has looked back and reflected on his professional career after officially announcing his retirement.

Price won 25 fights as a professional, with 20 coming by knockout, winning the British, Commonwealth, WBA Continental and English heavyweight titles along the way.

He defeated fighters such as Audley Harrison, Sam Sexton, Dave Allen, Matt Skelton throughout the years, and shared the ring with the likes of Alexander Povetkin, Derek Chisora and Tony Thompson.

He also had a glittering amateur career, with his accolades including an Olympic bronze medal in Beijing in 2008, a Commonwealth gold medal at Melbourne in 2006, and a gold medal at the EU Championships in Cetniewo in 2008.

At the age of 38, the Liverpool fighter has now decided to hang up the gloves, and he has opened up on the decision behind it.

He told BT Sport: “Well I haven’t officially announced that I’ve retired, but I have. I’m not going to be fighting again. That was only officially made up in my mind about six weeks ago. A few factors came into it.

“I’m 38, and the hunger was no longer there. That’s massive, which is why your elite fighters like Tyson, like Canelo, like AJ, they have got as much money as they will ever need.

“But that hunger is still there. That’s because they are fighting for glory. The glory had gone in my career. You won’t see me in a boxing ring again, for a fight at least.”