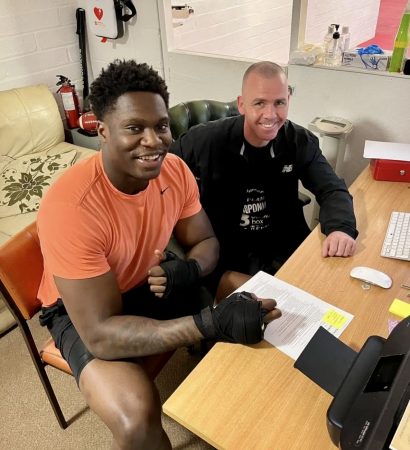 Everton Red Triangle’s newest recruit is a little different from their usual suspects. In the Liverpool- based sanctuary, there’s presently a plethora of professional bantamweights and featherweights, all from the local area, but the mould is about to be broken, as in steps London heavyweight Boma Brown.

Despite the differences in divisions and domains, he shares several similarities as a successful amateur at a similar age to his talented teammates, who have welcomed him with open arms.

The amateur champion was born in Wembley, went to school in Barnet, attended college in Stanmore, studied at Coventry University, and ended up in Birmingham.

The Arsenal FC fan, who is about to become a father for the first time, is planning on moving his family to Liverpool in November to work full-time with head coach Paul Stevenson.

He explained how he first met Paul, “It’s a funny story actually, I boxed one of his lads in the amateurs, who actually beat me, then me and Paul kept in contact and we’ve been working together the past few months now that I’m turning over.”

Now 26, the heavyweight debutant, currently readying for his pro bow, began boxing quite late, but was always very active in sport, he explained, “I started boxing at about 19 or 20-years-old; prior to that I had a basketball background.

“I played for Brent Blazers, which was down in London, from 14 up until I went to uni when I was 18; prior to that I played football at a relatively decent level, but I was I let go by Chelsea at 12-years- old.”

Two generational greats ignited the inspiration for Boma to begin boxing, “I remember watching the Floyd Mayweather-Manny Pacquiao fight and decided I wanted to try my hand at boxing to see what it was like. Tried it and just stuck with it and went from there.

“I started at Jewellery Quarter Boxing Club, but it closed down during COVID, so we all moved over to the Pat Benson Boxing Academy.”

Brown was fortunate to train alongside Team GB boxer and 2022 European Championships bronze medallist, Delicious Orie, “We started pretty much at the same time,” he revealed. “And sparred a hell of a lot of rounds together!”

Despite the delayed start in the sport, the natural athlete managed to accomplish quite a lot in a such short space of time. He listed his amateur achievements, “I won the Midlands twice and won the Elite Midlands Total Belt once as well. I boxed in the Haringey Box Cup once and reached the semis.” He went on to describe his boxing style, “I’m a power puncher, for sure; but I can box, definitely, but I think in the pros you’ll see a lot of knockouts and that’s what sells tickets and gets people into you.”

With top trainer Stevenson now guiding his career, he is excited to see what the future holds for him, “From what we’ve been working on already, I think he’s going to take me to the next level,” he enthused. “What he’s done with Nick [Ball], and what he’s done with Bradley Strand and Andrew Cain, and they’re all smashing it, the gym’s just firing at the moment.

“They’re all around the same age as me and they’ve all welcomed me in. I just think Paul and Anthony are gonna take my boxing to the next level.”

The aforementioned trio are all around the lower weights, so are lucky to benefit from excellent in- house sparring on-tap. However, standing at 6ft 6in and around 100lbs heavier, Boma will have to look elsewhere for his rounds, but not too far, thankfully, “I’ll look to get outside sparring in, but I’ll still spar with Delicious as well. There is one heavier amateur in the gym, but he’s a cruiser, Reece Sloane, who I’ve done a few rounds with so far, and that’s been good sparring for me.” ‘Bomber’ Brown is already preparing for pro debut, which he expects to be later this year, predicting it could be either October or November.

The Londoner will enter the heavyweight ranks at an auspicious time as the domestic scene is filled with promise and talent at all different levels right now, with the likes to Fury and Joshua in the top tier, newly crowned WBA World champion Daniel Dubois knocking on the door, followed closely by top contenders Dillian Whyte and Joe Joyce, and then there’s younger talents rising through the ranks like Fabio Wardley, Solomon Dacres and Matty Harris, and that’s to name just a few.

But there’s one other left off that esteemed and exciting list who Boma admits he is a big fan of, “I don’t tend to look at anyone else, I prefer to focus on myself, but I’m a big fan of Frazer Clarke. I like what he’s done and think he’s got all the tools to be successful.”

Back to Brown, he concluded the chat by looking past his pro bow to his long-term future in the paid ranks, “Me and Paul discussed where I want to be in six years and narrowed it down to definitely British level, and hopefully going on towards European and world title honours.”

Trainer Paul Stevenson, who once guided flyweight Kevin Satchell to British, Commonwealth and European titles, added, “Boma is a real talent, it’s early days in his learning with us but I’ve had him sparring some of our cruisers and we’ve had good heavyweight sparring coming in in South African heavyweight Chris Thompson.

“Boma is fitting in great to the gym and is really impressing us with his athletic ability, punching power and desire to learn.

“If Boma fulfills his potential and keeps developing at the rate he’s doing, it would be my hope and ambition that he’ll be heavyweight champion of the world five years from now.”

News on Boma Brown’s pro debut will be announced in due course.