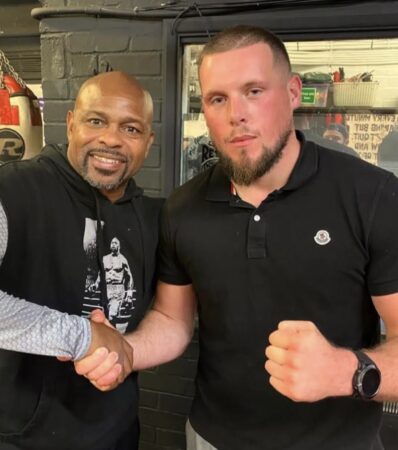 Fast-rising heavyweight ace Tommy Welch has not only been trading punches with a Fury but has also been picking up tips from a certain Roy Jones Jr ahead of his next fight.

The undefeated talent has been sparring with world-title contender Hughie Fury as he prepares for his latest appearance on the title-packed Hennessy Sports show on Saturday, 13th November, at the Coventry Skydome Arena, live and free on Channel 5.

Welch uses the Eubank Gym in Brighton and with Chris Eubank Jr bringing in Roy Jones Jr – the only fighter in boxing history to win a World Heavyweight title after starting his career as a super-welterweight – as his trainer, the unbeaten banger admits it has been an honour to have a living boxing legend offering advice.

“I’ve been next to him [Jones Jr] in the gym for the last four, five, six weeks with Chris Eubank,” he said.

“That has been really cool. I’ve been learning some great stuff from him. What a legend.

“Roy was coming in a good hour before Chris would come in and I’d be training. He would pull up his chair and you could just see his eyes were at work.

“I could feel his eyes watching me and thinking. He was pulling up on all sorts of things. If I was moving from the ring to the bags, he would follow me, pull up his chair next to the bag and watching my feet, then watch my hands.

“He has a great aura and a great energy around him. It is amazing to know Roy Jones Jr, but to have him giving me advice and telling me things, was genuinely a privilege.”

Welch is already under the guidance of his dad Scott, who was the British and Commonwealth heavyweight champion and challenged for a world title back in the 1990s.

For this latest camp they were joined by another stella father-and-son team – Peter and Hughie Fury.

And while the two fathers watched on, the sons went at it for three days’ solid sparring and of course, neither took it lightly.

“To be in camp with Hughie was great. And the spars were absolutely full-on. I won’t sit here and go on about stories from sparring, but it was genuinely a great experience.

“I respect the Fury’s, I really do. I like their work ethic and it was a great chance for me to feed off a world-title contender.

“Hughie is one of those fighters in the shadows. Him and his dad just keep their heads down and just get on with business. There’s no flashiness about them.

“I know cousin Tyson is the number one in the world, but even he was an almost hated fighter at the start but worked his socks off to turn everyone on to him.

“Hughie is a world contender, but he’s still on the up. He’s not like his cousin, who is sparing of course, but I guarantee, he has done all his hard work to get to the very top, so is now just perfecting it.

“Hughie still wants to learn, is working every day and wants to grind his socks off. I am doing the same. To be in camp with him was just great.”