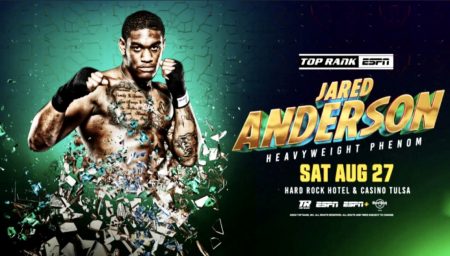 The highly anticipated return of Jared “Real Big Baby” Anderson is quickly approaching, and he won’t have to travel far for his August 27 fight. Anderson is holding his training camp at home in the Houston area as he prepares for his first fight of the year. The 22-year-old will challenge ten year pro Miljan Rovcanin of Serbia in a 10-round bout at the Hard Rock Hotel & Casino Tulsa in Tulsa, Okla. The fight will serve as a co-feature to the junior lightweight contest between Jose Pedraza and Richard Commey and be broadcast live on ESPN, ESPN Deportes and ESPN+.

While Anderson has traveled to Las Vegas for his recent camps, he made the decision to change things up and train at his home gym, the J Prince Boxing Gym in Houston. Anderson has remained active while he recovered from injury and has enjoyed the chance to work with the youngsters in the gym throughout the spring and early summer. He recently participated in a special back to school camp for kids in the area as he kicked off his own training camp. Anderson resumed full training earlier this summer and his lifelong coach Daryl Riley joined him last month for his Texas-based camp.

An additional perk of training in Houston is the chance to hold his camp alongside close friend, unified super featherweight world champion Shakur Stevenson, who is preparing for his September 23 Newark homecoming. The two, who have known each other since their amateur days, are providing extra motivation to one another during their grueling training sessions.

Anderson, a Toledo native, made the move to Houston nearly two years ago. Viewed as one of the top heavyweight prospects in the world due to his undefeated record and perfect knockout percentage, the 22-year-old’s success has caught the attention of Houston’s legendary heavyweight, George Foreman. Anderson and Coach Riley recently got the opportunity to meet Foreman and are looking forward to a gym visit soon from the two-time heavyweight world champion and 1968 Olympic gold medalist.

The August 27 bout will be Anderson’s first since a second round TKO over Oleksandr Teslenko on December 11 at Madison Square Garden. He will be fighting in Tulsa for the second time as a professional. Anderson scored a second round knockout over Jeremiah Karpency at the Osage Casino in Tulsa in April of last year.

A troublesome child turned potential future heavyweight champion, Jared Anderson is one of the brightest heavyweight prospects in the sport of boxing. Like so many in the sport, Anderson found the sweet science as a youngster due to his behavioral issues.

His mother, Deborah, was introduced to Toledo boxing coach Darrie Riley by a friend and after some early challenges, her rambunctious son fell in love with the sport.

He enjoyed a highly successful amateur career, winning multiple USA Boxing national titles at every age level and becoming a National Golden Gloves champion. Anderson represented the United States at multiple international competitions and relocated to the Olympic Training Center in Colorado Springs as a member of the national team.

Anderson made the decision to enter the professional ranks in 2019 and quickly caught the attention of the professional boxing world with his skill and talent both through his work in the ring and as a sparring partner for World Champion Tyson Fury ahead of Fury’s second fight with Deontay Wilder. Although he only had three professional bouts under his belt, Anderson provided Fury with valuable work leading in to Fury’s knockout victory over Wilder in February of 2020.

Anderson is trained by his original coach Darrie Riley and his former USA Boxing national coach Kay Koroma. A member of a talented stable of athletes based out of Houston, he often trains alongside fellow elite prospects and former world champions.

He was only three bouts in to his pro career when the world shut down due to the COVID-19 pandemic. While most boxers struggled to get fights during that time, Anderson remained extremely active in the Top Rank bubble. He fought on the opening card in the closed venue at the MGM Grand and went on to score to five victories, all by knockout in the bubble.

Anderson credits his team for keeping his busy and says that he stayed in the gym and stayed ready for every opportunity that presented itself. He and his team were extremely creative in finding locales for his daily training sessions while many gyms and fitness centers closed due to COVID-19 restrictions.

Known for his bright smile, childlike temperament and outgoing personality in combination with his 6-4 heavyweight frame, people began calling Anderson “Big Baby” as a child and says that it stuck with him. While many in the boxing world encouraged him to change his nickname due to another heavyweight fighter sharing the same ring moniker, Anderson feels strongly about sticking with it.

His personality and creative nature are often on full display in Anderson’s fight attire and ring walk. He loves to come up with new and fun uniform themes and always keeps the fans entertained with his unique ideas.

A product of a large family, Anderson credits his family and his roots in Toledo, Ohio as his biggest motivation and says he thinks of them when he needs an extra push during training or a fight. He recently relocated to Houston from Toledo and plans to bring his mother there with him as well.