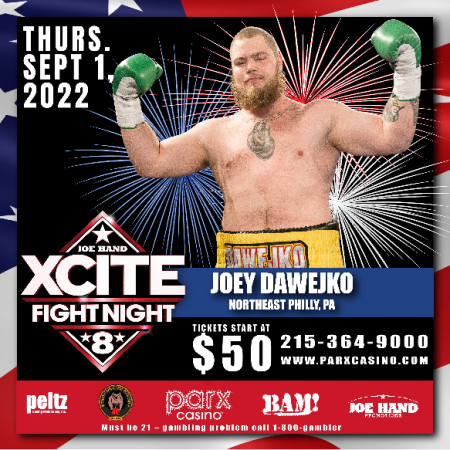 Dawejko was at a crossroads in his career and contemplated retirement. He was trying to figure out the next phase of his life after boxing. Dawejko worked as a roofer back in the day, but decided it was time for him to be on the other side of the business and own his own roofing company. That led to him opening Tank’s Knockout Roofing, which has been a great success since starting earlier this year.

Tickets to the seven-bout card at Parx® are on sale now at:

This card will be streamed by FloSports via the web, the FloSports mobile app (iOS and Android), or connected TV platforms such as AppleTV, Roku, FireTV, Vizio and others – for as little as $12.50 per month. Fight fans can subscribe with a monthly or annual membership today at https://www.flocombat.com/ to be ready for a full schedule of FIGHTNIGHT LIVE events in 2022.

One would think that owning your own company would be harder than having a day job, but Dawejko would disagree. “So early in my career, I was a roofer and I was working for somebody, and being out on the roof working 8-12 hours a day was a rough one. Now that I own my own company, it is a little different being able to rely on someone else to get the work done and stuff like that and me being able to train is a lot different. Having my own company and being able to do that is great.” Dawejko said.

This upcoming fight at Parx Casino on Thursday, Sept 1 will be a big fight for Dawejko. “This upcoming fight honestly, I’m trying to prove to myself that I am still worth it and I still have what it takes to go out and perform to my abilities and my expectations. Really this is a fight for me where I know that I am still hungry, and I know I still want to do this and that is what I want to prove to myself.” Daweijko still has the hunger and wants to see if he still has what it takes to make one more push to become a contender.

Dawejko has fought all over the world but there is nothing like fighting in Philadelphia in front of his hometown fans. He enjoyed the experience of fighting in countries like Russia and Germany, but hearing screaming fans that are there to see him gives him more motivation.

“You walk out, and your song starts playing and you just have this like tunnel vision walking to the ring. It is a great feeling. It’s something else and not everyone can experience that. “

What pushed you to start a roofing company?

“So honestly I was ready to retire from boxing and then Russell Peltz called me and worked it out where we would fight at home and back in front of my friends and family. I was looking for the next phase of my life after boxing because boxing has been my life full time for the past eight years. It was the right time for me financially and I wasn’t really worried about anything else. After talking to Russell, it got me back into boxing.”

How has becoming a roofer affected your boxing career?

“Back then it was tough because I was working so much and I wasn’t able to make it to the gym, but a few months ago my trainer, Mike Weaver, called and said listen we got this gym up here and why don’t you start coming in to stay loose. I decided to try it out. He was a fighter back in the day and he’s a little older than me but I kind of grew up with him but it could help me out and help him out with me being in the gym. I said I am going to go into the gym but not treat it as a fight that’s kind of where my motivation was to get to the gym. If I was treating this as a fight I would have felt like I had enough of this. So now it’s different I was just going in working out and now that a possibility for a fight coming it worked out perfectly. I was already in good enough shape where I can work out and get ready for the fight so it was perfect timing for me because I was going to the gym and stuff like that”

Devin Gantt of Sicklerville, NJ will make his pro debut in a four-round lightweight bout against Taijiro Arakawa of New York, NY who is also making his pro debut.

Christopher Burgos (3-5-2, 1 KO) of Philadelphia, Pa will square off against Nelson Morales (2-1) of Scranton, PA in a six-round super lightweight bout.