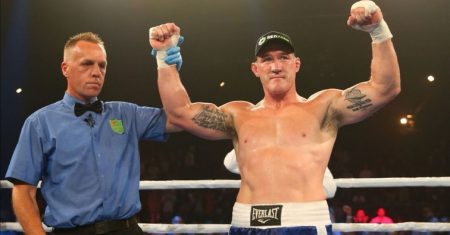 Paul Gallen will fight twice in the same night against Justin Hodges and Ben Hannant in a State of Origin heavyweight boxing extravaganza that hasn’t been witnessed in Australia for more than 130 years.

Gallen (12-2-1) will be following in the footsteps of Australia’s first ever world champion, Albert ‘Young Griffo’ Griffiths, when he takes on the Queensland Origin legends turned heavyweight challengers at Nissan Arena in Brisbane on Thursday September 15th.

In the co-main event, Harry Garside (3-0) will look to secure his first Australian title against Miles Zalewski (11-2).

Paul Gallen said: “I said in the lead up to their last fight that there’d be nothing more enjoyable than getting to bash two Queenslanders in one night and here we are.

“These two couldn’t get my name out of their mouths in the lead up to their last fight. Be careful what you wish for guys, because I’m coming to swing and swing hard and I won’t stop until you are both on the floor regretting the decision.

“I’m actually pumped that the fight is in Brisbane and I couldn’t care less about the crowd. They can boo me all they want but that will only give me more energy to go out and put on a show.”

No Limit CEO George Rose said: “Paul Gallen is one of Australia’s toughest ever athletes but there’s no question that this is going to be a massive challenge for him. He’s attempting to defeat two opponents in a single evening, deep inside enemy territory.

“Gal’s never once backed down from a challenge, so when we told him there’s an opportunity to take not one, but two Queenslanders in one night, he said where do I sign.down

“We’re working through the details of exactly how the fights will take shape but I guarantee you won’t want to miss it. It’s going to be an absolutely action packed evening come September 15th.