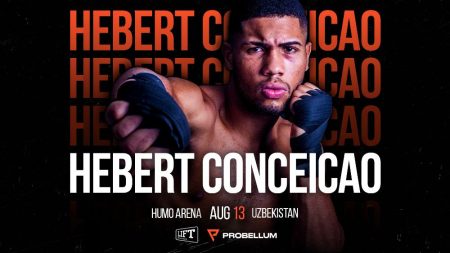 Olympic hero Hebert Conceição makes his professional debut on Saturday – and you can watch it live and for free.

The middleweight gold medallist from the Tokyo Games enters the paid ranks this weekend in Uzbekistan and this historic moment will be streamed at Probellum.com.

Conceição faces Danny Mendoza over six rounds at the Humo Arena in Tashkent as part of a LIFT Promotions event, which also includes fellow Olympic champions Faziliddin Gaibnazarov and Shakhobidin Zoirov, who struck gold at Rio 2016.

Saturday’s main card is due to start at 8:30pm local time.

Conceição won his gold medal last summer when dramatically knocking out Ukraine’s Oleksandr Khyzhniak in the final round but now he is focused on winning titles in the pro ranks.

Watch Hebert Conceição’s pro debut LIVE and for FREE at Probellum.com on Saturday.