Jackson, the former World Boxing Association light middleweight champion had moved up in weight after eye surgery for a detached retina. Because of this former injury, this bout could not be held in the united Kingdom. This bout, Herol Graham vs Julian Jackson was held in Spain. 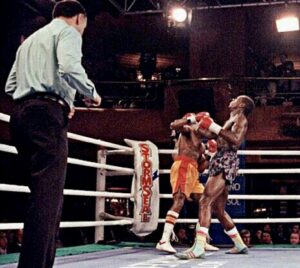 From the start, Jackson struggled with Graham, unable to land anything of note. With his left eye near shut, the ringside doctor gave Jackson one round to continue before he would stop it. 1:13 of round 4 (of 12), Jackson desperately threw a punch with full intent, and it landed flush.

Graham was out cold before he hit the canvas. He remained out on the canvas for a period of time and there was initially some concern over Grahams state. He was up shortly after with all OK.

This one punch KO is regarded as one of the most brutal finishes in boxing history.