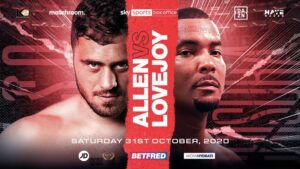 Is October 31st going to be chilling for Allen as his third choice opponent appears to be a heavyweight powerhouse. Or is this all an illusion? 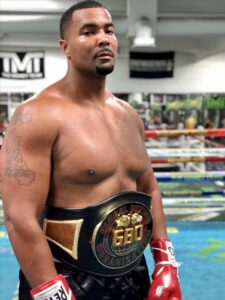 Enter Christopher Lovejoy from the US, world rating 443 from 1,405, but somehow with a lofty rating with the WBA of number 15 (never surprised). Glossy on the outside but when you take a deeper look into his boxing record, something stands out. ALL BUT ONE BOUT WAS AGAINST A FIGHTER WITH A LOSING RECORD! Add to that, he has never been over three rounds with most ending in the first round. Game plan should be straight forward for Allen.

“I’ve always believed that anyone in the world who will stand with me, I will beat. If he goes around at over 20 stone, I don’t see how he gets out of the first round. That is not me being over-confident, that is me looking at it for what it is.  He has done 21 rounds, he has never been in with anybody any good, looking at his record. He doesn’t last a round with me. I’d be very surprised if he did.

“Looking at it for what it is, he’s a novice pro. All the pressure is on me and I don’t mind it because I think he is way out of his depth.

“In terms of experience, I have never been in a better place,” he said. “I have still only had 35 fights amateur and pro. The sparring with Usyk brought me on again. I genuinely think I am a top 25 heavyweight now. I’ve got a confidence about me now.

“He’s very good. I could tell he was good because when I was sparring I could feel myself learning.

“He didn’t understand a word I was saying, but I said ‘I got that from you’ and he nodded. He was so good, he was teaching me how to throw a right hand to the body. He may be the best fighter I have ever shared a ring with.”

You cannot ask for much at this short notice. But what if he actually is good and the bad record is just a red herring?

Maybe, just maybe….this could be a trick for Allen. One thing is for sure, Lovejoy is an unknown quantity. He could be hopeless, he could be the next Tyson, you just can’t tell. So intrigue is there, like the main event (even if for different reasons).

I love Halloween, this years I think will just top them all.

“I Will Go Through Him” – Derek Chisora on Oleksandr Usyk Mike Tyson vs Roy Jones Jr. Will Be For a WBC Belt