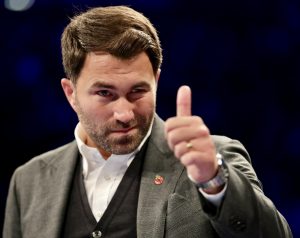 In an interview with William Hill, Anthony Joshua’s promoter Eddie Hearn gave his early opinion on the Tyson Fury vs Deontay Wilder fight that looks headed to December 19th.

“I think Fury has got to be a huge favourite, he’s beaten him twice already really,” Hearn told William Hill. “But Wilder is dangerous. And you never know a fighter’s mindset when they go from achieving what Tyson has achieved with a load of money in the bank.

“How much does that hunger in Fury still exist? You can bet your life the hunger will be there for Deontay Wilder. But Tyson Fury is a big favourite in that fight. He’s really schooled him twice, and I expect him to do so a third time.”