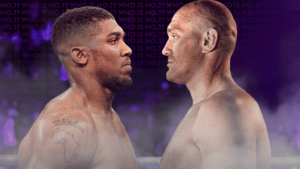 When a fighter turns professional, it’s all about how far and how quickly you progress.

Some fighters never seem to progress far nor quickly with the transition. One example in the heavyweight division was Audley Harrison, a top amateur (reaching gold in the Olympics) that never really made it as a professional (there were high expectations from him).

A heavyweight that has scaled the heights and in quick fashion is Anthony Joshua. He had his first amateur fight when Tyson Fury turned professional and both are on a collision course for 2021 (if all goes to plan).

“Remember, he was a heavyweight well before my time,” Joshua told Sky Sports.

“He turned professional in 2008. That was the year I had my first amateur fight! I never thought I would catch up to Fury. He was never someone that was on my radar. So I’ve never known Tyson until I turned professional and started barking at the heels of these heavyweights who were docile.

“I started bringing some heat. Now they became relevant in my life. My relationship with Tyson is only because I progressed as quickly as I did, and he didn’t progress as quickly. He’s had two good wins – against Deontay Wilder and Wladimir Klitschko. Over a long period of time, a career that has spanned 12 years, I would have liked to have seen him in some more challenging competitions.

Since October of 2013, Joshua has done all that was expected of him to the point of winning his first heavyweight title in April of 2016. Yes, it was against a fighter who won the vacant title against someone that lost via injury but since then he has done all.

He has defended the title(s) six times without defeat, in the process of unifying with titlist Joseph Parker and defending against a former longstanding champion in Wladimir Klitschko. Add to the list, defeating in a rematch the one fighter that beat him in his seventh defence (Andy Ruiz Jr.) and that’s about it, isn’t it?

With the exception of Fury, and being fair, it is only boxing politics involving mandatory’s that has kept the two of them apart.

The current path is for Joshua to fight Kubrat Pulev and for Fury to fight Deontay Wilder for the third time, then hopefully in 2021 they should meet.

They need to fight each other otherwise this will be Lennox Lewis and Riddick Bowe all over again.