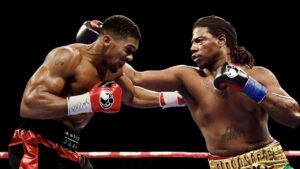 Former IBF heavyweight champion “Prince” Charles Martin lost his crown when he was stopped by Anthony Joshua in two rounds (2016). This was the start of Joshua’s first title reign, collecting all the belts (apart from the WBC) before running into late substitute Andy Ruiz Jr in June 2019.

Since losing to Joshua, Martin (28-2-1, 25 KO’s) has had six fights, only losing to Adam Kownacki (on points) and is looking to get back into the heavyweight mix. He is currently hoping for one of the elites to pull out of a fight with so much going on at the moment, offering his services if Joshua vs Pulev doesn’t come off.

“Charles is going to fight by the year’s end in a ‘stay busy’ bout, while we wait to see if Joshua vs Pulev actually goes off in December,” his manager Mike Borao told Sky Sports.

“In the event Joshua vs Pulev doesn’t take place for any reason, Charles will be fit and ready to step in with either fighter and/or fight for a vacated title. Charles is the dark horse of the division. People in the UK may count him out, but given the opportunity, he will prove them wrong and become two-time heavyweight champion!”

After seeing Joshua beaten by Andy Ruiz Jr, Martin is hopeful to get it on with Joshua again.

“Praise him all you want but as soon as he left his comfort zone? He got messed up. He can’t weather a storm. He just drops. He hasn’t proved himself. He wanted to get all the American fans, be the next Mike Tyson, but it didn’t happen,” Martin said.

“I Think Roy [Jones Jr] is Going to Get Seriously Hurt” – Danny Williams “We Crack on, Fans or No Fans” – Eddie Hearn on Dec 12th (Joshua vs Pulev)