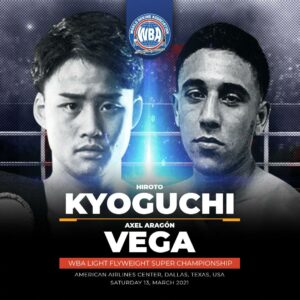 Japan’s Hiroto Kyoguchi and Mexico’s Axel Aragon Vega went face to face in a press conference prior to their fight on Saturday in Dallas, Texas, when the Japanese will make the third defense of his World Boxing Association (WBA) Light Flyweight Super Championship.

Both offered their impressions before the fight at the American Airlines Center, a special one for both of them.

Kyoguchi has just signed a promotional contract with Matchroom Boxing and will be making his first fight in the United States, which marks the beginning of a new stage, as he said.

“I know it will be a big fight, but it’s not my ultimate goal. I’m going against a shorter fighter, but I have a strategy and I’ll be able to deal with him,” Kyoguchi assured at the press conference.

For his part, Aragon Vega knows he has a great occasion in front of him and that fighting for the WBA world title is the most important challenge in his career so far.

“It’s a great opportunity. I’m very motivated to go forward and become champion. We know how to work the distance well,” said the Mexican to the press.

After the press conference, the only thing left is the weigh-in, which will take place tomorrow and in which they will have to mark the 108 pounds of the division. Kyoguchi has a record of 14 wins, no losses, and 9 KOs, while Aragon Vega has 14 wins, 3 losses, 1 draw, and 8 KOs.

The bout is scheduled to take place in the same card in which Roman Gonzalez and Juan Francisco Estrada will fight for the WBA 115 lbs. belt in the main event.