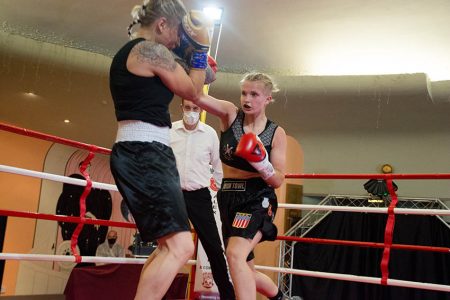 Towl, from Sheffield, had a seriously stellar Amateur career, securing no less than five National titles plus numerous regional accolades before stepping up to the professional ranks on the 4th September 2020, aged just 16 years and 307 days old, to face and beat, by fifth round stoppage, Jaime Bates at the Northern Hotel in Aberdeen.

Two further victories followed, the first a points victory over Cara McLochlainn on the UK’s first All Female professional boxing show, a behind closed doors event during the COVID lockdown that took place at the Northern Hotel in Aberdeen and broadcast live on FITE on the 24th April 2021. The second a first round stoppage victory over Melissa Horianto at the Homelands Stadium in Ashford, Kent on the 14th August 2021, set the teen star up for a shot at the WIBA Youth World Championship against Nigeria’s Abosede Obisanya at the Hilton Brighton Hotel on the 4th September 2021, exactly one year to the day from Towl’s pro debut.

However fate reared its ugly head when Obisanya failed to get her visa in time. Towl’s manager Chris Boyle had a frantic time trying to secure a suitable under 23 years of age opponent in time to challenge for the WIBA Youth World title, so some quick negations led to the WIBA President Ryan Wissow agreeing to allow Towl to compete instead for the full World Championship against Argentina’s Cristina Del Valle Pacheco.

A first round stoppage victory see Towl crowned the youngest professional boxing World Champion, of either gender, at just 17 years and 307 days old.

Fifty seven days later, on the 31st October 2021, Towl was back in action, this time facing and beating late replacement opponent Naomi Konatu by a first round stoppage.

Originally Towl was due to face Nigeria’s Cynthia Ogunsemilore for the Professional Boxing Council (PBC) Intercontinental Featherweight Championship – Ogunsemilore and her team had travel issues when they arrived in Holland for transfer to UK and were unable to continue the journey. Naomi Konatu stepped in with just 48 hours notice for a six round non-championship contest.

On the 13th February 2022 Towl moved up a division and faced and beat (on points) former Italian Amateur National Champion Nadia Flalhi, who was previously unbeaten as a pro boxer, for the Professional Boxing Council (PBC) European Super Featherweight Championship.

Just over a month later, on the 26th March 2022, Towl successfully made the first defence of her WIBA World Crown as well as added the Professional Boxing Council (PBC) Intercontinental Featherweight Championship belt to her collection with a sensational fifth round stoppage victory over Nicaragua’s Jamileth Vallejos at the Shirebrook Leisure Centre and broadcast live on FyteHub.