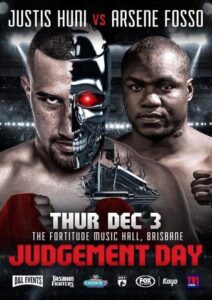 Fight Notes: Time of the stoppage by referee Phil Austin was 1:07 of round 4 for a Huni stoppage win. The Bronze medalist has already signed to defend against former WBA heavyweight champion Lucas Browne and former world heavyweight challenger Alex Leapai in 2021.

Fight Notes: Time of the stoppage was 0:28 of the 10th round. Bout scheduled for 10 rounds at welterweight.