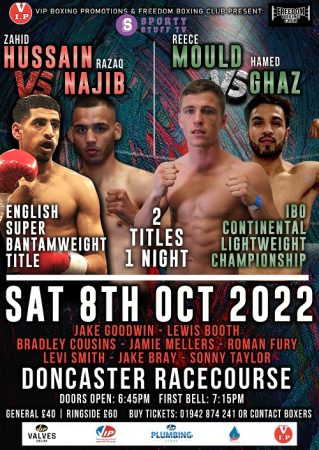 Zahid Hussain insists his revenge rematch against Razaq Najib will not even be “close” when they clash on VIP Boxing’s bumper show at Doncaster Racecourse on Saturday October 8.
The vacant English Super-Bantamweight title will be on the line when the Yorkshire enemies clash in a quality ten rounder being shown live on fast growing SportyStuffTV.
When they met in March 2019, Sheffield boxer Najib (12-4, 2 KOs) won a close contest over ten rounds, but VIP managed and promoted Hussain (16-2, 2 KOs) disputes the verdict.
The Sheffield man who hasn’t boxed since losing against blue chip prospect Hopey Price 12 months ago said: “The majority of the crowd and my team thought we won it clearly.
“I got to watch the fight a few weeks ago and it was not even close. The rounds were close, but the fight wasn’t close in terms of who won the rounds.”
It will be third time lucky for their eagerly anticipated return fight. It has been postponed twice because of a cut suffered by Hussain and a last minute query on Najib’s medical.
Leeds man Zahid believes the wait will be worthwhile adding: “Whether it is a stoppage or points win I am not going to allow it be a tight decision.
“Razaq brings a pace, only knows one thing and that is to go forward. He has a good engine and we are fully prepared for everything he brings.”
The exposure on SportyStuffTV will help Hussain move towards a crack at British champion Liam Davies if he emerges victorious.
He says: “When Steve Wood told me he had a TV deal and that it would be free to air on SportyStuffTV I was delighted.
“It is great exposure and I am pleased for Steve. He has a big stable of boxers and I wish I was with him from day one.”
Top of the bill is local boxer Reece Mould (15-1, 6 KOs) who will contest the vacant English Lightweight championship.
Boxing six rounders on the undercard are Lewis Booth, Jake Bray, Jake Goodwin and Sonny Taylor. Bradley Cousins, Roman Fury, Josh Hargreaves, Jamie Mellers and Levi Smith are in four round action.
Mould’s title challenge and Hussain v Najib will be televised for FREE by SportyStuffTV (@Sky 437 @Freesat 250 @Freeview 264 and www.sportystuff.tv) with VIP Boxing YouTube screening the
undercard live.
The final few tickets £60 (Ringside) and £40 are available from all boxers on the bill and 01942 874241.