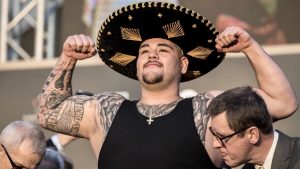 This is a strange one. As reported prior by boxen247.com on the 27th July (click > here <), Andy Ruiz Jr. was already in training with his weight was already down.

As you will read further in this post, you will read: we’re going to train hard, I’ve trained a bit, but I’m going to start [today], I can’t wait any longer. I thought he had been?

Hold on, before you correctly say he is referring to training with Eddy Reynoso (his new trainer), yes you are right. But the impression I got from two months ago was he had been training hard and the weight loss had already (or started to) take place. There were even reports of a trim weight of 245 lbs.

Maybe it’s me, maybe I’m being over critical because training (or the lack off) is the decider as to which Andy Ruiz Jr. will turn up in future bouts. Remember, he was “training hard” and the “camp was amazing” whilst preparing for the Anthony Joshua rematch and we know what happened there. Over 20st and an even softer version of his always very soft self was the main reason for handing back the titles to Joshua (that’s not taking anything away from Joshua’s performance).

I have always liked the personable Ruiz Jr. (33-2, 22 KO’s) and his performance whilst capturing the title against Joshua was breathtaking and not many saw that coming. Skilled, quick, determined and, well, motivation took him to heavyweight championship stardom but fame and money got the best of him. Remember Buster Douglas.

Will we ever see him back to his best?

Well, that’s why I am posting. Back to last December and he said he was in tremendous shape but looks, the weight and ultimately the performance told another story. July 27th showed hope of what was to come, and maybe I am way off, but the alarm bells are already ringing again.

Ten months have passed since he last fought and I hope, I sincerely do, that he returns back to his “destroyer” ways. If, and it is a big if, if he was back to his old motivated form, he could easily fit back into the top ten as there are many options out there.

Time will tell and I hope I am wrong, but I get the feeling that ‘stardom’ has KO’d the motivation.