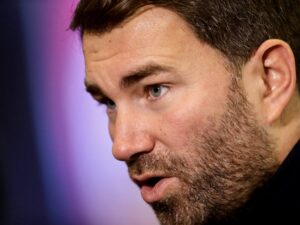 “I just don’t understand why he’s gone so quiet,” Hearn said to IFLTV on Wilder, who is uncharacteristically quiet since his loss to Fury. “I’ve said a few times because I almost wanted to see Wilder come out and say, ‘Right, all these people talking s**t about me, thinking I’m not going to take the rematch.

“I’m taking the rematch, it’s mine, and I’m winning my belt back. Let’s go.’ But I haven’t seen one interview, one article, one statement. He hasn’t got to do that, by the way. He can do what he wants. Don’t you think it’s a bit weird?

“Fury has goaded him a couple of times, hasn’t he? ‘You dosser, where are you hiding?’ Nothing. So I don’t know. [Fury’s Top Rank promoter Bob] Arum is talking about February or March now, but now he’s changed his tune, saying ‘December 19th.’

“So I hope that fight [Fury vs. Wilder 3] happens this year because I’ve been not negotiating with Bob, but over the last couple of weeks, me and Bob have been talking about Fury against Joshua.

“I think we’re ready to go to contracts on that now and make it official, I really do,” Hearn said about Joshua vs Fury. “But it’s very uncertain until we know what Fury is doing in December, January, or February.

“Hopefully, he can fight in December, and they [Joshua and Fury] both win, and we can make the fight for the spring. But we can sign the contract now, subject to them both winning. It’s no problem, and I think again, talking to Bob, everyone’s on the same page.

“The fight is on. We’ve put it in writing with them. We confirmed this deal. We’re ready to move forward on this deal. We never got anything back by the way, but I trust the people I wrote to say, ‘We’re on board as well.’

“So, I think everyone’s on board. It’s only the uncertainty of the world we’re in at the moment. ‘We’re [Joshua vs. Pulev] fighting December 12th. When are you fighting? Let me know, and we’ll get our contracts done,” Hearn added.

“We know AJ is exclusive to Sky,” Hearn continued. “Tyson, does he have a first, last matching agreement or whatever? Can we share the broadcast? I’m open to any of that discussion.

“So that’s the main thing: Sky, BT, and the American broadcast. I honestly don’t see an issue. What are we as promoters? Ruthless, money-hungry. Well, is there a bigger fight in world boxing? Absolutely not.

“How much money is in these two fights? [between Joshua and Fury]. Hundreds of millions of dollars. So you can’t have it one way. One minute I’m a money-grabbing asr***le, and then, on the other hand, I’m actually don’t want the fight.

“Please. What do you think I want? I want the money and the glory and the success, and all three of them come from that fight because he [Joshua] will knock Tyson Fury out,” Hearn concluded.