“I Personally Would Like to Fight Canelo” – Chris Eubank Jr 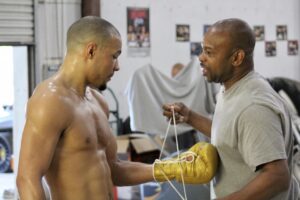 Chris Eubank Jr was in America training under Roy Jones Jr when some surprising news surfaced about his charge.

“I thought there’s no way Mike Tyson is getting back in the ring,” said Eubank.

“Once I realised it was going to happen it became a lot more serious. So let’s help coach get ready for war.”

Mike Tyson is scheduled to fight Roy Jones Jr on November 28th in an eight round exhibition fight despite Tyson not having fought professionally in fifteen years.

“For a guy who has been inactive for the last 15 years and having lived the life he lived – smoking, drinking, partying and abusing his body – to come back is a hell of a thing,” Eubank told 5 Live Boxing.

“It’s an amazing thing for boxing fans to see. I just hope they can prepare effectively enough so they are not in serious danger when they get in the ring.”

Scheduled to fight in December, Eubank Jr is enjoying learning from one of the best pound-for-pound boxers of all time (in Jones Jr).

“At this stage of my career I don’t think it’s possible to completely change a fighter but I have this renewed energy now with Roy that I didn’t think was possible,” added Eubank. “Now I’m excited about what am I going to learn.

“I’ve never really had this relationship with anyone in boxing. I have learned a hell of a lot from my father but he hasn’t been able to be there day in, day out like a real trainer needs to be.

“This time and moment in history has been a blessing to me. No disrespect to anyone affected negatively by Covid-19. If it hadn’t have happened I wouldn’t be where I am now.”

Nearing the end of his career, Eubank Jr explains what he is still aiming for as a boxer.

“I personally would like to fight Canelo,” added Eubank. “The fight has to happen. It’s one so many fight fans are calling for. I’m number one contender so he needs to fight me or give up that belt.

“I wouldn’t say I’m unfulfilled. I’ve had a great career, made a name for myself in the sport and I’m financially stable for the rest of my life. But is there more I can achieve? Absolutely. And I will achieve those things.”