“I Think I’ll Beat Him” – Dubois Keen on Joyce Rematch 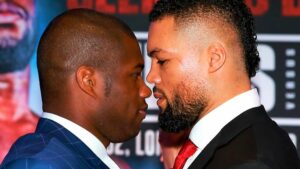 High up on the heavyweight wish list of the returning Daniel Dubois is the chance to put right the only blot on his record that came against British rival Joe Joyce.

Dubois, who is back in action with a WBA Interim title shot against Bogdan Dinu in Telford on Saturday, says he would relish the opportunity of setting the record straight against the 2016 Olympic silver medallist should their paths collide once more.

Joyce was triumphant at the end of November when a compelling contest came to an end following Dubois taking himself out of the firing line due to extensive damage to his left eye. The now No.2 ranked WBO contender looked to have executed a cunning and effective game plan to derail the Dubois Express but, when the younger man was counted out, he was actually ahead on the scorecards.

Dubois can put himself right back in the title picture on Saturday with victory over the 20-2 Romanian Dinu, but scoring an equaliser against the only man to have defeated him as a pro remains a high priority, although he insists he will not be consumed by feelings of revenge in the meantime.

“I really do want it, but time will tell what route we both take from here,” said the 23-year-old with a current record of 15-1 (14 KOs). “I would love to fight Joe again. I think I could really do something and beat him. I wasn’t losing by a ton and getting pasted, it was a close fight in my opinion, so nip and tuck, really.

“I want to get back in that sort of level fight and beat someone of Joe’s calibre. We’ll see, I don’t know, only time will tell if it can happen. Right now I am just excited about the comeback.

“I do want to have revenge and to put it right, but if I’ve got to take it out on someone else then, hey, Bogdan is there to get it, isn’t he?”

Returning to the fighting fold with a major belt on the line is a significant bonus for Dubois and he believes we will witness a combination of his previous bullish approach as well as a degree of patience in the way he sets about Dinu.

“It is not bad at all and it is a nice cherry on the cake for my comeback,” he added on the prize on the line. “That is how I look at it and this belt is an important one to get me ranked and on track again.

“I know enough about him and he is a decent fighter, but not on my level and I will put him away in devastating fashion, I believe. I will make a real statement in this next one.

“You will see a bit of both from me, I think. I’ll have that fire in me to go out there and cause mayhem, but also to show my boxing and clever work behind a jab to set it up better.”

WBF Boxer Of The Month For May 2021: Elina Tissen Canelo is WBA Fighter of The Month