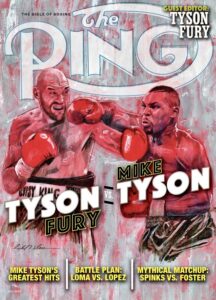 Tyson, 54, told Ring magazine: “Against someone of Tyson Fury’s size, you’ve got to be aggressive, move your head and be elusive because if you stand still against a man that size, you’re an easy target.

“You need to attack, use angles and stay away from his punching distance.

“You need to be close, but you can’t stay at a distance that allows the bigger fighter to get off.

“Size and style isn’t the most important thing in the ring; it’s the morale of a fighter that leads to victory.

“His determination, his will to win, his desire is what makes him a champion.

“But my answer is that I’ll beat any man born from his mother. I just wouldn’t say that directly about any of the heroes from the past.

“But, deep down, I don’t believe that any fighter from the past can beat me.

“I think I’m the greatest fighter that’s ever lived – from any generation.”