“I Thought We Agreed The Fight?” – Anthony Joshua on Tyson Fury 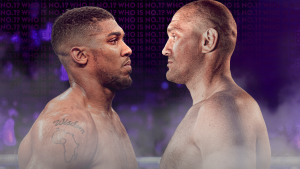 As long as they both get past their next fight (Fury must face his mandatory Kubrat Pulev that looks headed for December and Fury must oblige his rematch clause with Deontay Wilder making it their third installment headed for December 19th) then it was as such agreed by all they would meet straight after in 2021. Or not?

“When the time’s right we’ll fight. We’re keen but I’ve got Kubrat Pulev first which is a mandatory defence, which I have to do. Once I get past that I’m a free agent. I’m going to say we’ll fight next year but everything else that comes with it, I’ve just got to put to the back of my mind and just focus on Kubrat Pulev. Once I get past him, hopefully Fury will be the next one in line.

“I listened to an interview the other week and Fury said that ‘we need to make the fight and stop messing around’. But I thought we agreed the fight? Then he said if Dillian wins he’s going to vacate the belt. I just think he’s got a lot of things going on in his life that he says things that don’t really add up.

“I respect him, I don’t really know him but I respect him as a human. I could continue to talk but the best talking will be done in the ring. It’s the best place to let our gloves do the talking.”

Why are things not that simple.