“I Want Ramirez Next” – Josh Taylor on Jose Ramirez 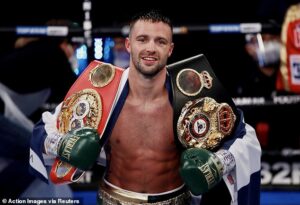 After winning last night (September 26th), Josh Taylor spoke about the prospect of fighting Ramirez in early 2021 for the undisputed championship.

Taylor said, “One hundred percent, I want Ramirez next. He’s a very good champion, unbeaten like myself, hungry, on top of his game. I thought the Postol fight, it wasn’t a very good performance at all. I do feel he can perform better than that given the circumstances. Again, I wasn’t impressed with what I’ve seen from him. Again, I want that fight now. I believe I’ll whoop his ass all day long.

“I’ve never seen anything from him that I haven’t seen before, so yeah, I want that fight as soon as possible. Obviously, I know the situation with {Ramirez’s WBO} mandatory, but hopefully, we can sort of get that worked out. I would like, for selfish and personal reasons, to get that fight next. I deserve it. I’ve been in big fight after big fight for my last four fights. Not ducked anyone. Never ducked a tournament like someone else. I’m game. I’ll fight the best whenever they want. To be honest, I would rather wait until the fans are back for that fight. It’s a huge fight. It’s one of the biggest fights at the minute for all the belts.”