“I Want To Break His Head” – Anthony Joshua on Tyson Fury 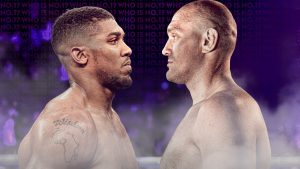 Each of the heavyweights at the top of the tree seem to be all taking it in turn to comment (more than usual for some and some out of character) on their fellow combatants. Some have been recently humbled, some plain vengeful (promoters as well).

Anthony Joshua briefly spoke on Fury and their proposed fight whilst on Sky One’s A League of Their Own.

“I have a lot of respect for the man, he’s a good family man and a good fighter, but on the other hand, I want to break his head.

“First six rounds, I think, well I know I’m going to take him out then,” Joshua added.

“I have had a shorter career, so I’m fresher. I’ve been in the deep end longer so I can handle the pressure and I believe I’m going to take him out. Fury drew the first and then rejigged his game plan and took Wilder out and schooled him really but I think I’m faster than Wilder anyway, call it what you want, I believe I’m better.”

“It Was a Fantastic Fight” – Sergio Martinez on His Comeback Alesandro “Sandro” Mazzinghi Passes – R.I.P