“I Will Go Through Him” – Derek Chisora on Oleksandr Usyk 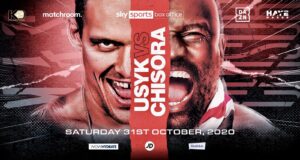 Now this is a fight many people have been waiting for….Oleksandr Usyk vs Derek Chisora on Halloween night. As much as it is expected to be a good fight, and i’m sure it will be, it will answer a question that is high on many boxing fans minds….is Usyk going to be a threat at heavyweight?

This is really a strange time for the heavyweight division as England seems to have the division sewn up, with Anthony Joshua holding the WBA, IBF and WBO titles (oh, and the IBO title for what it is worth) and with Tyson Fury holding the WBC and lineal heavyweight titles. Throw into the equation Dillian Whyte, Danial Dubois and Joe Joyce and that is a large proportion of the current heavyweight elite.

Ukraine’s Usyk (17-0, 13 KO’s) is an 8-1 on favorite to defeat Chisora (32-9, 23 KO’s), with Chisora saying he’ll “go through” the undefeated southpaw. I do not doubt he will try, but with Chisora (and I admire him as a true battler), he tends to blow hot and cold that has resulted in an inconsistent boxing record.

His nine losses do not truly represent what he is capable of, a throwback to how fighters used to be, winning or losing, taking his ‘licks’ and moving on and not worrying about his record that is not the norm for today’s boxers where they have protected unblemished records with no defeats.

He will certainly test Usyk more than most fighters would with his good blend of size, weight (sometimes too much if he is unfocused), power and proven endurance. He is the opponent that WILL answer the questions about Usyk. But can he win?

“It’s not about how much I want it,” Chisora said. “You know, when you want something badly, what you will do for it. I’ll go through this man. Whatever he has got, he’ll need more to stop me. The way I will come for him will be unbelievable. I will go through him.

“I don’t think, in the heavyweight game, there is anybody stronger than me right now. Anthony Joshua, Tyson Fury, Dillian Whyte, Deontay Wilder? No, they aren’t stronger than me. I’m stronger, crazier and I want it more.”

Since clearing out the Cruiserweight division, Usyk has fought just once at heavyweight, against Chazz Witherspoon. Witherspoon (38-4, 29 KO’s) was defeated by Usyk last October in Chicago, winning most rounds clearly until retiring after the seventh round. Usyk was expected to dispatch Witherspoon (38-4, 29 KO’s) in quicker fashion. Maybe he wanted the rounds? This will be answered by Chisora as he will not give Usyk time to breath. He will surely attempt to get his head on Usyk’s chest and work Usyk, this maybe one of those fights where it’s one of those last battles where a fighter gives his all to redeem some of the past defeats where he could of won.

“I don’t wanna let myself down,” said Chisora. “Nothing else. I want to give my all. When it’s all said and done, I don’t wanna look back and say, ‘I should have done better in this fight.’ I want to let it all go, so when I hang up the gloves, I don’t have regrets. That’s the motivation I have. For me? It’s not about being in the top 10. It’s about giving the best fights to the fans. Every time you wake up, the rankings are different. It doesn’t faze me. How many people are interested to see me fight? The rankings don’t matter to me.”

With COVID-19 postponing the original fight date, this has resulted in both fighters out of the ring for a sustained period. Chisora hasn’t fought since last October, defeating once heavyweight prospect David Price (25-7, 20 KO’s) by fourth-round technical knockout and as well with Usyk having last fought twelve months ago (against Witherspoon).

Whilst both fighters will be rusty to a certain degree, I have a feeling that there will be no ‘feeling-out’ period with the year out benefiting Usyk as he has had a longer period of time to walk around being a heavyweight. Both will surely be in prime condition with many interested eyes watching this bout.

This bout will be a treat and as said prior, will answer many questions about Usyk.