“I Would Love To Fight Joshua” – Mike Tyson 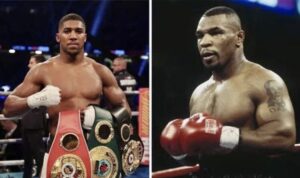 Mike Tyson has announced that he “would love to fight” Anthony Joshua in a charity exhibition despite a 24-year age gap.

Under coach Rafael Cordeiro, Tyson has transformed the way he looks and in many videos has looked destructive despite his senior age. Cordeiro has stated that the 54-year-old is in the best shape that he has been in for a long time to the extremity that he believes he is fit enough to challenge for a world title.

Tyson himself is open to the challenge after confirming an interest in taking on unified champion Anthony Joshua. First of all, Tyson is to fight Roy Jones Jr. on November 28th in an exhibition fight that will tell us how much Tyson has left at the advanced age of 54.

“If doing that means we can have a bigger charity exponent, well so be it, I’m down to do that, too.

“I would love to [fight Joshua]. That would be mind-blowing.”

It will be his first fight since 2005, losing to journeyman Kevin McBride.