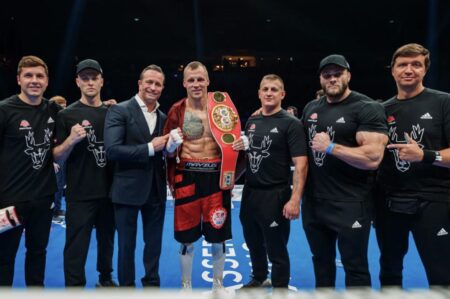 The Latvian boxing star was fighting for the first time since capturing the coveted Muhammad Ali Trophy in the final of the World Boxing Super Series tournament against former WBA and IBF World Champion Yuniel Dorticos.

The 36-year-old from Riga was cheered into the ring by his passionate home support who were in attendance to see the three-time world ruler win his fifth major world title fight and claim his twentieth career knockout.

Mann looked to meet Briedis in the centre of the ring but was outboxed by the champion who sent the former WBO International title holder to the canvas once in the second round and twice in the third before the referee called a halt to the action.

“Thank you to all the fans who came to support me. You are fantastic,” said Briedis after the bout.

“My opponent was not easy. We prepared very well for this fight and invested a lot of time and work. I am happy to defend my titles and I look forward to collecting more belts soon.”

“That was a great performance by Mairis,” said promoter Kalle Sauerland. “Tonight, he showed once again why he is the man to beat at 200lbs. There are a lot of big fights out there for him. A unification with Lawrence Okolie, a mandatory defence against Jai Opetaia or a move up to Heavyweight. Mairis has already proven he is the number one in the division and now it’s about securing legacy defining fights. 2022 is going to be a massive year for him.”

British boxer Harlem Eubank made his promotional debut for Wasserman Boxing on the undercard in Riga. The 27-year-old Super Lightweight from Brighton, who is the cousin of Wasserman stablemate Chris Eubank Jr, moves to 12-0 following a stoppage victory over Nika Nakashidze.