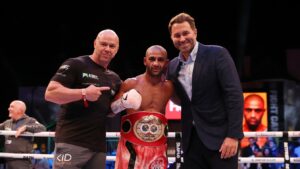 The Sheffield star (28-1, 17 KOs) turned in a superb performance on Saturday as he clinically stopped Liverpool’s Jazza Dickens in eleven rounds to claim the vacant IBF crown at the top of the bill on Fight Camp Week 2.

Trained by Dominic Ingle out of the famous Ingle Gym, Britain’s latest World Champion is targeting supremacy at 126lbs, and has already called for unification fights with the likes of WBC ruler Gary Russell Jr. and WBO Champion Emanuel Navarrete.

Galahad has dedicated his whole life to the sport of boxing and is regarded as one of the hardest workers in the game, and the 31-year-old former British and European Champion has an ultimate goal of becoming the Undisputed Featherweight king.

“DAZN and Eddie have a new star on their hands,” said Galahad. “I told you all before this bout, ‘I AM FIGHT CAMP’, and I believe my performance on Saturday night showed that. Now I look forward to showcasing my skills back in the arenas in front of the crowds.

“Boxing is at its best with the boxing fans in attendance – and Featherweight boxing is at its best when Kid Galahad is in the ring, under them bright lights, shining and closing the show in style. From the ring walk to the ring craft – I’m the best in the division and I’m ready to put on a proper show with Matchroom and DAZN.”

“We’ve been working closely with Kid for some years now but it’s great to make it official and sign a multi-fight deal at this exciting stage of his career,” said Matchroom Sport Chairman Eddie Hearn. “His performance on Saturday was faultless and stands him as one of the seven British World Champions in boxing right now. I’m looking forward to the future and seeing him in some big unification fights.”